Today, Mr.Cobs and I have been married 37 years.  Really doesn’t seem that long … but the sprinkling of grey in Mr.Cobs hair, and the ‘God spilt grey all over’ my hair, kind of tells the truth of the matter.

I wondered how many actual days 37 years worked out to be … so I went in search, and found something which gave me not only the answer to that question but answers to a few more too … so I set to work and made a personalised ‘thing’ using photoshop:  … 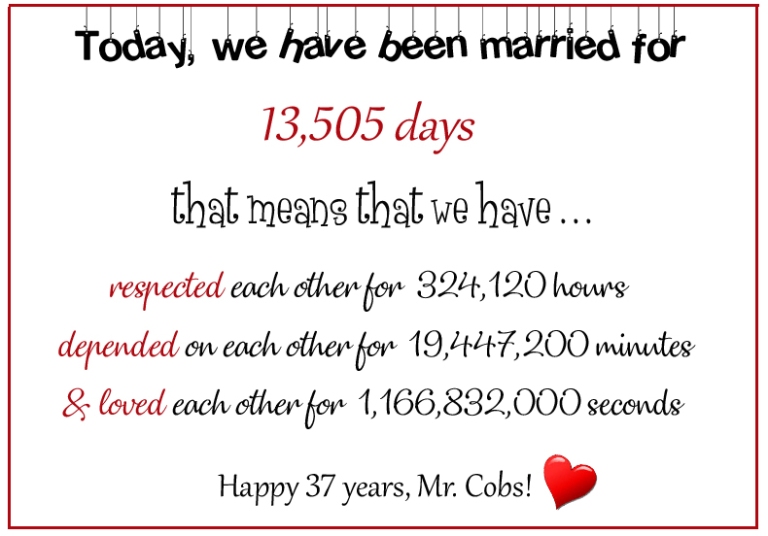 Please note that I missed out how many times we’ve given each other one of  *those* looks when we’ve disagreed with each other.  lol.

I handmade just a simple card, – I didn’t feel it needed anything complicated.  He’s not really a complicated type of chap.  I wanted to get Little Cobs involved so got him helping me to find tiny little rocks which were flatter than the norm.  We collected a little pot of them, so that I could make a choice of two which kind of matched each other.

Little Cobs kept asking me:  “What are you going to make with them Grammy?” ... and of course I couldn’t tell him, because he’s just useless at keeping secrets, so I told him that I wasn’t entirely certain, but that I would show him when he came for the day on Saturday. 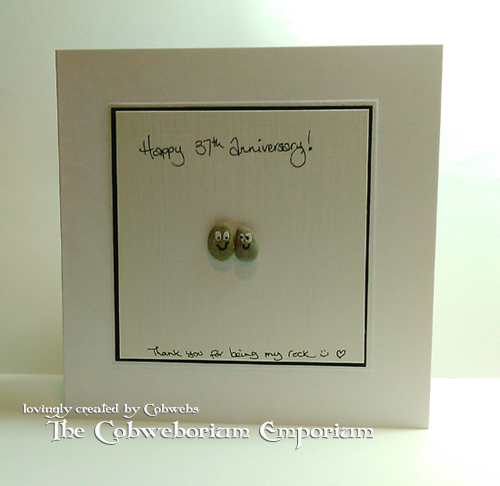 I hand wrote the words, as it just made it all more personal and special.  And yes… he really is my rock.  Even with the bad cough he’s sporting at the moment, he’s still right there.

a partial side view – so that you can see that the rock pebbles really aren’t that thick.

The lighting makes it look like I’ve used cream card on top of a black layer, on top of another cream layer, and then attached to a white cut and folded card – but in fact,  all the card – apart from the black card, is snow-white white.  I think that the difference is that the layers of white card are linen card – so it reflects the light in a slightly different way and softens the hardness of the white.  But … to the naked eye, the card really is white.

Thank you so much for coming and sharing a coffee with me and taking a peep at the card.  I love seeing you.  But … you know that anyway 😀

Sending squidges, from me here in my corner, to you there in yours.