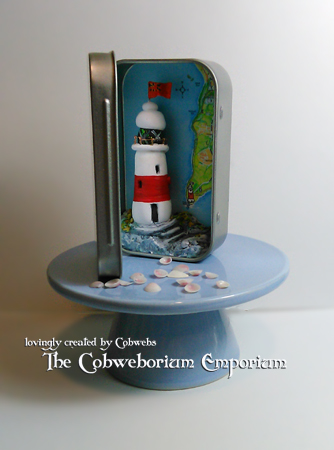 Those of you who have known me for some time,  know that I love working in ‘little’.  I love the quirkiness of making little things, and I’ve made things in tins before and posted them on the blog here, but not very often.  However, just as the world turns, I’m kind of coming back to tins again. I first began making things in tins about 25 years ago, (obviously I was only … ooo…  erm ...  two and a half at the time – cough-fibber-cough), and I remember the Master Craftsman – who was teaching me to sculpt in clay –  commenting many times that …  “… It’s all in the details with you, Cobs, isn’t it!”.  He noticed something that had never occurred to me – but once he said it, I could see that indeed, it really was!

But anyhoo …. Mr.Cobs has a friend who lives back where we used to live – (someone Cobs Snr. used to work with) – who comes and visits every now and again, and both of them go out and make a day of having jolly fun together, eating, visiting places of interest, and generally doing what lads like to do.  Well, Mr.Cobs Friend is coming in a few weeks for a visit, and I got to thinking that here I was, making things for __________ (fill in blank space), but I’d never made anything for him.  So I set about thinking of what I could make him which would be a memory of Dorset (where we now live).

I know that when he comes to visit this time, Mr.Cobs and he have made a plan to get on a boat and go over to Brownsea Island.  Now … I will freely admit that since we’ve lived in Dorset, I’ve had absolutely no inclination to visit the island.  I will sometimes sit in the harbour on the mainland, with a coffee, and get the binoculars out to have a bit of a nose at what’s going on around the island – but have never wanted to go.

When I found out the chaps planned to go there, I thought I could make something relating to Brownsea Island, as a surprise for Mr.Cobs Friend, which he could take home.  BUT . . . after doing some research I was stumped about what on earth I could fit into a little tin Diorama,  which would be interesting, but also decorative, if he and his wife wanted to display the gift. which related to Brownsea Island.   Nothing.  My brain gave me either a red squirrel or a tree.  No.  Those wouldn’t do at all!

Brownsea Island – A link to the National Trust Website –  if you’d like to see/read about the island.

So I had to think about other places which might be on the agenda for another time, and Portland Bill Lighthouse popped into my head.  The more I thought about it the more solid it became – so …. I made it.  Well …  I made an artist’s impression of just the actual lighthouse.  It does have a cottage building attached to it – but I chose not to include that as it would have made the tin too crowded – so just made the lighthouse itself, from lightweight clay (so that the tin remained light in weight) – adding the windows, door, the ‘foghorn’ sounder on the side …  and the railing around the walkway which runs around the big lamp at the top. 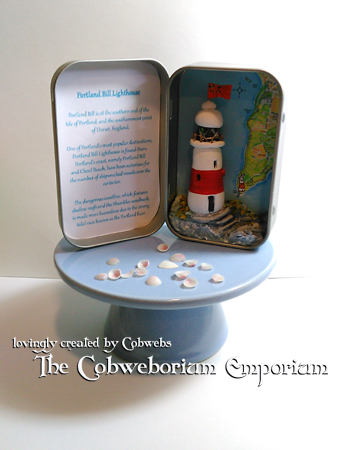 I set the lighthouse atop of some ‘Portland rock’ – well, an artistic impression of it anyway.

Portland Stone is a limestone which has been used for centuries and can be seen in many buildings such as St. Paul’s Cathedral and Buckingham Palace.  (you can read more about this on Wikipedia by clicking  HERE) 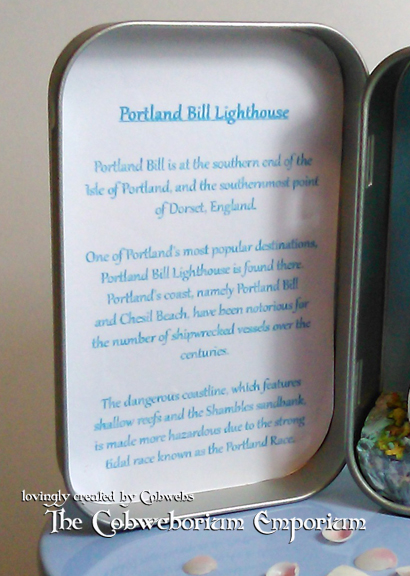 For anyone interested in reading more about Portland Bill – I offer two clickable links:

Trinity House  – a website which gives information about a lot of the Lighthouses here in the UK – but this link will take you directly to the Portland Bill page.

You can just about see the flag waving in the breeze, on top of the Lighthouse – it’s the British Red Ensign, which is the flag used by civilian vessels.

The tin is roughly the size of an Altoids Tin – at (approx) 95mm x 60mm x 20mm (ish).  And …  the lighthouse isn’t flat backed (which it seems to look in the photos).  When I created it, I made it completely round from base to top.  So when you look at it, you can turn the tin a little, and see around to the back.

Ohh…. and yes, those really are teeny tiny,  real  sea shells in front of the tin!  So delicate and so pretty.

Well, that’s what I’ve been up to in the last few days, in my newly painted craft room.  I’m still in a bit of a fiddle with the organisation – but my fingers were itching to make and create, so I left everything as it was, and instead sat and made something.  I could stand it no longer!  (A gals gotta do what a gals gotta do!).

Thank you so much for coming for a visit.  I love to see you here.  Do let me know that you’ve been and shared a coffee moment with me.  I love to know who I’m talking to – so just say ‘hello’ in a comment if you can’t think of anything to say, and I promise I’ll say hello right back!

Wishing you a truly blessed Monday and a happy week ahead.  Everything here in Great Britain is gearing up for the Royal Wedding in a week and a bit’s time.  Flags and bunting are coming out all over the land.  It’s all looking very jolly!  Anything going on where you live?

Sending you much love and squidges ~

52 thoughts on “A little bit of Dorset in a little Tin!”