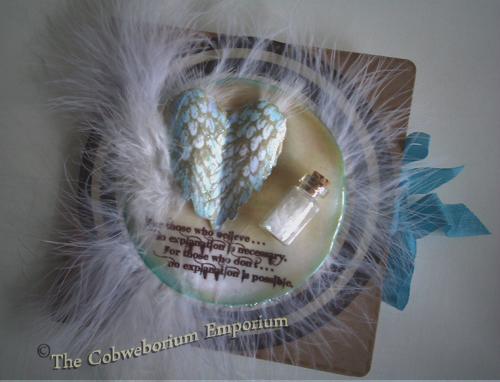 A handmade card, but with a story behind the making of it.

Last weekend I had my    Ranger Melt Pot out with the idea of making ‘something’ (I knew not what at that moment in time).  I didn’t have a plan.  I just knew I wanted to play with my Melt Pot.  Everything was on my desk, ready and waiting for me to conjure up something which I could make in my Ranger Melt Pot category here on my blog.  But what?  WHAT?

I sat back in my chair and had absolutely no ideas.  My mojo had gone out for drinks and not invited me.

Ah well, I said to myself,  you’ve got the thing out now, so just mess around, and who knows, something might come from playing and making a mess.  I stamped out an image of some Angel Wings, embossed and then distressed them using denim ink and lavender ink.  Cut them out and then shaped them to given them some depth and ‘apparent’ movement.  I printed out some words onto some lightweight card – thinking that I’d put the wings in the Melt Pot and mount them  onto the card.  But .. I decided that I’d do it the other way round.  So I cut out the words into a big ’round’ –  using my EK circle cutter, – and then distressed around the edges of that circle with the same inks I’d used on the wings.

Turned on the melt pot and once my crystals had melted I began to move the large circle around in the molten liquid.  I advise CAUTION when using a melt pot – keep tools in each hand so that you’re not tempted to touch anything.   I use a pair of long-handled craft tweezers in one hand and a bamboo skewer in the other.  It doesn’t stop the urge to touch – but it makes you touch in a safe way, with the tools rather than your fingers.

Once I’d coated the front of the circle, I removed it from the liquid and just let it drip for a moment, then laid it flat to let it ‘set’ and go cold.  Unfortunately – the lightweight card was too lightweight and it curled all around the edges and curved in places.  It wasn’t what I wanted.  I cleaned up and left the coated surface on one side.

Then a couple of days ago I looked at it again and told myself to try using it and see what I’d come up with.  So here’s what I did: 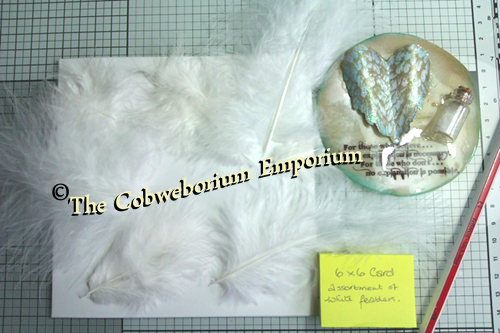 Originally I chose a white 6×6″ card but changed my mind and used a 6×6 craft card instead; and some white feathers.  I placed the wings on the circle where I felt they looked best, but the circle still seemed like it was missing something.  So I chose a tiny glass bottle with a cork stopper, and put the tiniest of white feathers inside it, along with a teeny pinch of iridescent glitter, just to draw the eye to the feather, as I knew it would stick to the feather and the inside of the glass jar.  It looked really lovely – so I glued the jar to the disc, and fixed the wings in place.

I felt that the wings looked a little flat, so I used some Anita’s Gloss and carefully coated the wings then put everything to one side while I worked on the card.

Using brown and a shimmering gold (not mirror) card, I cut out circles so that I could mat and layer the wings/words/glass jar onto them.

I chose some blue ribbon in a shade which echoed the blues of the distressing around the edges of the wings and the disc, and using some permanent tape, I fixed the ribbon running it over the back and front of the card, exactly at the ‘half way’ mark.

… then matted and layered the other discs in place, sometimes tucking a white Angel Feather into the layers.  Once the wings were dry and the glued bottle was fixed in place, I fixed some feathers onto the top layer then applied the disc topper which I’d made on top, adding just one smaller feather tucked under the outter edge of the wings.

Three close-ups of the teeny tiny white Angel Feather in the bottle.  It was really hard to capture the feather – so I chose the best three photos of a large bunch of rubbish ones that I took.

Of course – there HAD to be a surprise inside the card …  (you knew that, didn’t you! lol)

On the front page of the insert is a psalm from the bible, which speaks of Angels:  I stamped it onto some white paper, and distressed it a little, then fixed it to the craft paper insert

. . .  a pair of white feathered Angel Wings, and a stamped image of a feather, drifting freely.

Once finished, I really like this lovely card – which began with a disenchantment with the way the topper turned out, but I’m really glad that I made it into a card.  It looks a little flat in the photo’s, but to the naked eye it has a depth and a wonderful warmth and gentleness about it.  And to be quite honest – if someone sent me this card I’d be chuffed to bits.  Seriously chuffed to bits!

So anyway  …  enough of me and my crafting.  What have you been making or doing?  Leave me a message with a link to your blog and I’ll come and take a look and leave you a message too.

Wishing you a totally fabulous weekend.  May your Angels surround you and protect you from any harm.