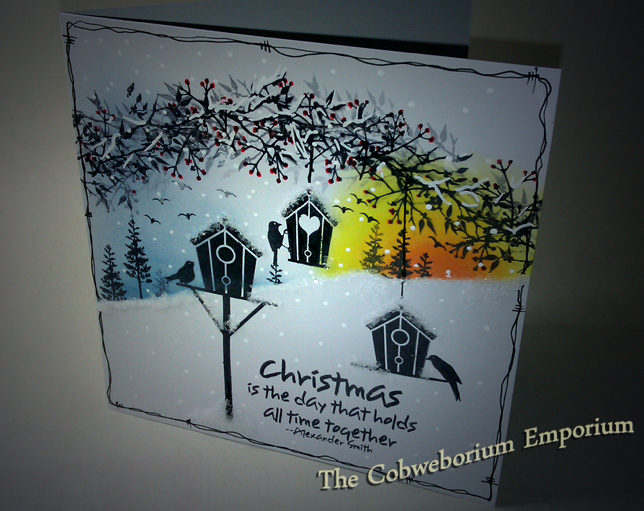 Continuing with my easy and  ‘low-cost to make and on postage costs’  Christmas Cards, – made using Card-io Stamps, stamp ink pads and a bit of imagination.  Today we’re feeding the birds their Christmas Dinner.

I love this card as it has some humour built into it somehow.  It makes me smile when I look at it.

To make:  I began stamping the garland towards the top of the card,  using a twiggy stamp,  and a berry stamp – to which I added a little red by colouring over the berries with a fine tipped red Staedtler pen.

Then I ripped a sheet of cheap copy paper in a wiggly but straight(ish) line and angled it on top of the card in the place where I wanted a snow-covered hillside in the background  to be.   Using three colours of Versa Color ink pads I ‘made’ the sunset  by blending first the lightest yellow colour, using a cheap cosmetic sponge – over the edge of the torn paper.   I then added a soft shade of yellowy orange to the centre – blending it outwards so that the colour began to graduate.  Finally I added a tiny touch of a deep warm shade of orange, again blending outwards so that there were no ‘edges’ to the three colours, but a warm glow.  Voila!  A sunset.

To make the blue sky over to the left hand side of the card, I did the exact same thing as making the sunset – simply blending (this time) two colours of blue.

Next came the sentiment closely followed by stamping the bird houses/feeders.   I added the trees in the background, and birds on the bird boxes, individually.

I ‘framed’ the whole  scene by hand drawing a pair of wiggly, barbed,  lines around the edge of the card.

Then came the fun stuff …  the Snow! 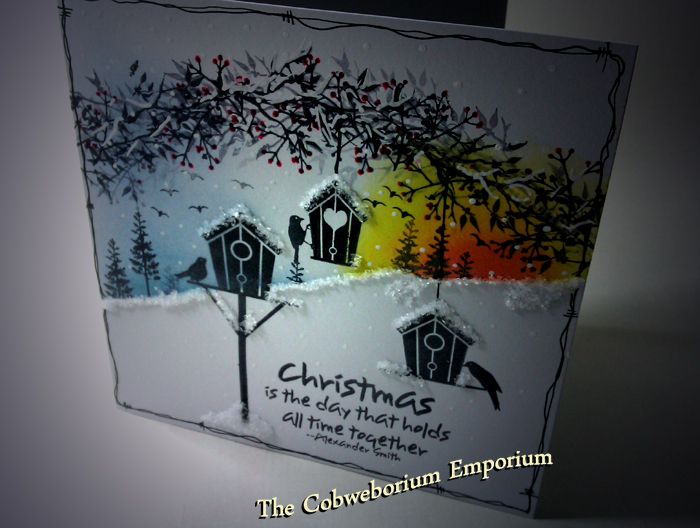 I took this photo at an ‘odd’ angle so that I could capture the snow to show you where it was.  I used Pinflair glue, and added Pinflair Snow Dust to make the snow on the hillside, and on the tops of the bird houses/feeders;   around the bottom of the post on the one bird house/feeder and along the ledges.

I also added more ‘snow’ by using a Graph It marker in white.  Using it as ‘snow falling from the sky’ by dotting carefully and gently over the scene, and also adding little strokes to the garland so that it looked like snow had collected on some of the twigs.

And that, as they say, is all there is to it!

I really enjoyed the making of this card, it came together so quickly and was such fun.  (I was watching Judge Judy at the time – so I’m astounded it turned out well at all.  Judge Judy is SO acerbic and caustic, she has me hooting with laughter.    I’m quite sure that I’d get it in the neck from her for doing that – so please don’t anyone tell her or she’ll ground me for a week!  LOL)

Whilst I’ve got your attention:  those of you who were waiting for my ‘Craft Product I Recommend’ blog post about Card-io Stamps – it is in the pipeline, and there is a reason that it’s not on the blog here yet, which you’ll find out about when I actually post it.

Thank you so much for visiting and staying with me for a while.  I SO enjoy your company.  I always feel like you’ve come and joined me at my kitchen table, and shared a coffee with me while we’ve had a good ol’ chat and a few giggles about crafting.  Perfick!    (lovers of Pop Larkin;  author H.E. Bates;  Darling Buds of May, will ‘get’ that word:     →  but for those who haven’t got the foggiest notion of what I’m talking about – replace ‘perfick’ with ‘perfect’).  😀

Day two of a selection of Christmas cards, made using Card-io Stamps – but on this card I’ve added a stamp made by another company:  Clarity Stamps.

I wanted to make another wreath stamp, but one totally different from the one I made yesterday.  I began by stamping one of the bunnies from a set of Clarity Stamps  – (re-mountable Bunnies and Grass,  clear stamp set – should you wish to buy some, I’ll put a link to the Clarity site at the bottom of this post).

I used a mask to cover the bunny so that I could stamp the wreath using a little ‘branch’ type stamp from one of the sets in my Card-io stamps, and using the same method I used yesterday – second generation stamping, in order to give the wreath a little depth and dimension.

I blended three colours from my Versa Color ink pads, to get the sunset effect, and then using two shades of blue – one chosen from my Whisper Archival ink pads and the other from my Memento ink pads, I did the rest of the ‘sky’.

I then stamped the Pine trees and birds, stamped the bare oak tree, and then drew in the short length of fencing using a very fine tipped black pen.  Finally I added the tiny stamped image of the family – father, mother and the two children, heading off across the snow-covered meadow to go and choose their Christmas Tree.

Then it was time to add ‘snow’.  Using some Pinflair glitter glue and some Pinflair Ice Diamond, and some of their Snow Dust – I added crystal like snow to parts of the wreath, and to the snow scene within the wreath.  I also added some around the fluffy tailed bottom of the little rabbit who’s peering through the wreath and watching the family walking away.  (No doubt so that he can perhaps find a way into the garden and snaffle any winter vegetables which might be there for the taking!)

I had a terrible time trying to photograph this snow – it just didn’t want to show up on the photo’s.  So I tried taking a photo which was just a tiny bit out of focus to see if that would work and … it did!  So although this photo isn’t the best in the world – you do actually get to see the ‘snow’ and where I applied it … 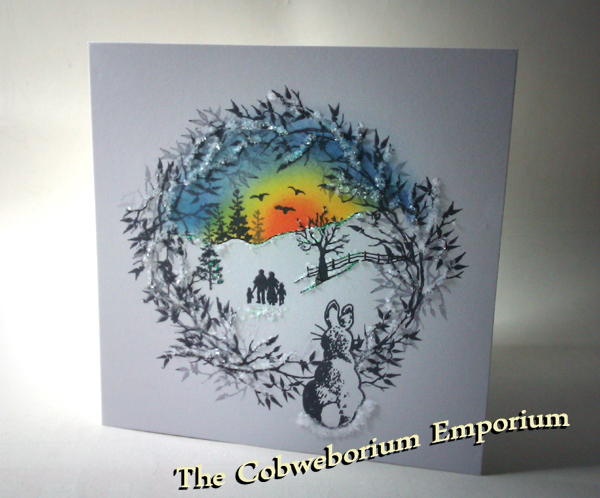 . . . .  and a little closer up so that you can see both the second generation stamping and the snow a tiny bit better:-

I had such fun making this card.  It was quick,  easy,  very little planning,  and no fiddling about with die cuts, embellishments or fussing.

As promised yesterday, I am working on a post which will tell you more about Card-io stamps, and that will be appearing on my blog this week, so please look out for it.

Thank you so much for coming to visit today.

Have a truly wonderful Wednesday!  love ~