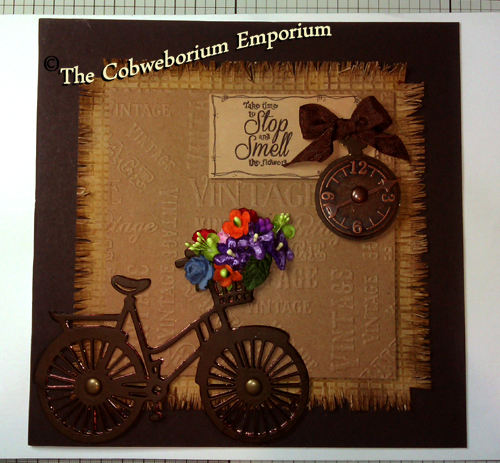 I’m going to attempt to say as little as possible in this post (because I’m WAY too ‘wordy’),  and instead just add ‘points’ to tell the story of what went into the making of this card, in case you’d like to make one like it.

Measure, cut and attach the black card to the front of the white base card. 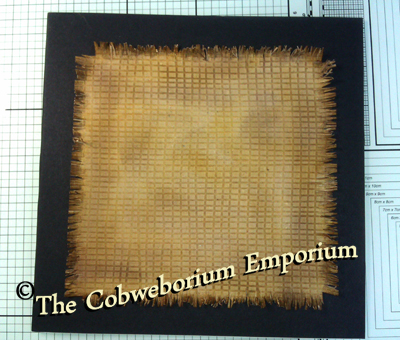 Cut into the edge of the ‘hessian’ card to make it looked like frayed hessian.  Then lightly dragged some ink in three colours over the hessian effect so that it looked grungy.   It didn’t matter that it wasn’t blended properly – most of it isn’t going to be seen – but it’s more important for it to have that ‘old and battered’ look.

Attach the ‘hessian’ to the black card which is fixed glued to the front of the card.

Embossed another sheet of card (cut to size) – but this time the Kraft card is a warmer shade than the ‘hessian’ effect card.

Die cut a bike and fill the ‘basket’ on the front of the bike with an assortment of flowers.  Add brads to the centre of the wheels, then attach the bike to the card.

Stamp up a tag with the sentiment.

(The wiggly border on the tag is hand drawn with a fine tipped pen).

Die cut a fob watch shape, added a metal clock face, pointer – and a ‘dis-armed’ large brad cap. (there’s a smaller,  hidden brad which holds the pointer in place and because of that the pointer actually does spin round!)  Attach the fob watch to the front of the card – over the ‘hole’ in the tag, so that it looks like the tag and watch are ‘paired’

Thank you for coming and taking a look at one of my card makes.