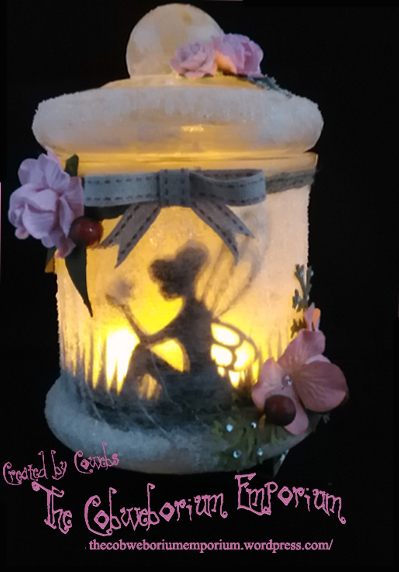 To capture a Fairy in a Jar ...  you simply have to be gentle and kind, and want to capture her (or him) with all your heart.

I originally found a photograph of a fairy in a jar on Pinterest. I fell in love with it instantly and literally stopped everything I was doing and got all the supplies out on my desk and began to make my own jar ready to capture my fairy, right there and then.

I’ll warn you now that this blog post is photo heavy.  I totally forgot to take pictures at each stage of the make, simply because I was SO into making it.  But I’ve taken a photograph from all angles of the finished fairy in my jar, so that you can see it all around and even on top, and I’ve taken photo’s in sunlight from the window in my craft room,  at dusk in my craftroom and even in the house in the darkness – at night-time, with all the lights off.   So here goes, dear reader.  Get ready for lots of photos ….

I chose to keep the lid of the jar, as I wanted to have a choice of how it was displayed (lid on/lid off).  My original idea was to have the lid on during the daytime when the Tea lights weren’t alight, and leave the lid off at night when the lights were switched on.  But I actually love it both ways.

I did, at first, decorate the glass lid with white cotton fabric (like shirt fabric), which I tied on with string around the  knob on the top.  (It was glued in place).  I decorated it with buttons and flowers.  However, when I stood back to look at it, I wondered if I’d like it better if I’d have done the same thing on the lid as I’d done to the jar itself.  I lived with it for a couple of days, then stripped the cotton off, scrubbed it clean again and decorated it to match the jar.  And …. I love it like that!

You should only use battery operated Tea Lights inside a Fairy Jar.  That’s so important that I’m going to say it again:  YOU SHOULD ONLY USE BATTERY OPERATED TEA LIGHTS IN A FAIRY JAR!  This is because you’ve glued paper and or card to the inside of the jar.  Paper/Card and Candles DON’T MIX WELL  – unless you want to start a FIRE!  We don’t want any accidents … so please don’t even try out a candle inside the jar.  Please, please buy battery operated Tea Lights for your version of a Fairy Jar. You don’t have to put three in if you don’t want to.  One works … Two makes things twinkle brighter, and three, for some reason, makes Fairy Wings seem to flutter just a little.  Why is that, I wonder?  It must be Fairy magic!

My wonderful little Grandson comes to visit at the weekend and we have him for about 5/6 hours to give mum and dad a little free time to do stuff.  When he came last weekend, I introduced him to the “Fairy Shadow I caught in a Jar!”  …  I didn’t want him to hear me say I actually caught a Fairy in a jar, because … well, he knows me to be kind and loving, and anyone who’s kind and loving most certainly doesn’t catch a Fairy and stuff them into a jar!  So I explained that I’d caught a Fairy’s shadow.  That sounded much nicer, more gentle, more kind and loving.

I didn’t think he’d be over-impressed, after all it was just a Fairy, and the big thing in his life was CARS!  – however he was awestruck!  I came in from my craft room, carrying the already lit and lidded jar really carefully, and I whispered to him that he had to:  “be very quiet and careful because I’ve captured a Fairy Shadow in a Jar!”  ….  I placed the jar down on the coffee table so that he could see it.  His little face was a picture.  He got down on the floor and perched his chin on the coffee table and gazed, . . .  and his eyes grew to the size of saucers!  There was so much magic showing on his face and in his eyes.  So much ‘awesomeness’ (I don’t think that’s a word,  I think I made it up for the purpose of explaining – lol).  He looked at it for ages.  Then, moving quietly around the coffee table – he examined it carefully from all angles.  All of a sudden  … he slowly lifted his arm,  and with one finger he delicately reached out and  v.e.r.y.  gently  touched  the side of the Fairy  Jar,  almost as if he wasn’t sure if what he thought he was looking at, was actuall really, really there!   Thankfully …  I managed to capture that very moment on my camera . . .

I was totally thrilled to pieces that he liked it.  Everybody else could hate it if they wanted to,  but the fact that he liked it, was so impressed and so awestruck by it meant the absolute world to me.

I was so engrossed in the making of this Fairy Jar that, as I said previously,  I totally forgot to take photographs of each step of the making.  However …  I’ve got something better than my explanations.  A video, which you’ll find at the end of this post.

I enjoyed making this so so much.  It was fun from the start to the end.  I was going to give it away,  but, once it was made  …  I fell head over heels in love with it and couldn’t part with it.

In the video which you’re about to watch  …  White tissue is used in the making.  I however used a VERY PALE pink tissue in this project (above)  and as you can see, it worked perfectly – as you can see from the photos.  But it was simply a matter of choice.  I have a selection of tissue colours.  Something about the pale pink called to me, and I found my hands reaching for it.  So … don’t feel you have to follow the instructions to the letter.  If there’s something you want to do which will make a fairy jar yours and yours alone, then do it!  If you want to use  …red tissue then do so!  Blue tissue to make it look icy?  Go ahead!  Oh – and do post some photo’s on your blog, and then come back here and let me know so that I don’t miss your fairy, because I’d love to see more of these.  I’m already planning another one and I’ve just today found a wonderful jar in the shed which will work brilliantly!

If, after watching the video, there’s anything that you want to ask about the Fairy Jar In the photographs above, which I may have forgotten to mention, then please feel free to ask in a comment here and I’ll answer you within 24 hours.  One thing I think I haven’t mentioned is that the glitter I used on the outside of the jar was a chunky glitter, not the fine stuff, which I mixed a little card makers ‘snow’ into it, just to add that ‘frosted’ look to the whole thing.

So,  that’s me done and dusted for another beautiful day.  It’s been a little windy around here the last few days.  But thankfully we were not ‘hit’, other than a few branches in our garden came tumbling down – but nothing structurally was hit, so I’d call that blessed.

I hope you too have a truly blessed day.  Remember to stop and enjoy life – even for just a moment, and in that moment be thankful for all you too are blessed with.