I know that you can get very good texture pastes for crafting, but they come at a price.  I’ve never before bothered about crafting with these texture pastes as it just didn’t feel like my cup of tea (so to speak), but recently I’ve had the urge to have a go.  And so I did.  Only .. not with crafters texture paste.  A few days ago Mr. Cobs had to visit B&Q (other DIY outlets are available), and I asked him if he would get me some Polyfilla.  After looking at me with a very suspicious head to the side and squinting his eyes look, I explained that I wanted to use it in crafting, on some cardstock, using some stencils, so I needed “the fine, ready mixed stuff please”.

Bless his heart, he didn’t just bring me back the required tube of Polyfilla, but also a special scrapery type tool to help me get a smooth ‘pass’ with the creamy Polyfilla.

I chose a stencil – a metal Jellyfish stencil by Dreamweaver – for my first ‘have a go’. 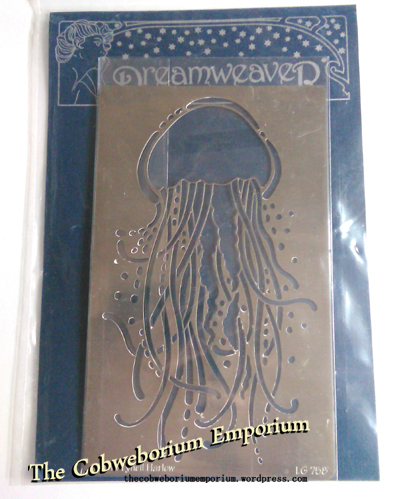 I have to admit that I did question as to whether I was being a bit over-ambitious, but I pushed that thought to the back of my mind and ploughed on with hope ever-present in my brave heart.

It was a little bit fiddly when I dragged the Polyfilla over the stencil as there were a few parts which just hadn’t ‘taken up’ the gungy stuff, so I got down and dirty and scooped some excess ‘filla off the scraper then promptly blobbed it back onto the scraper again in just the right place and dragged it carefully over the spots that had ‘missed’ first time round, and VOILA … the gaps were filled.

I wish that I hadn’t been quite so excited when I removed the stencil, for I would have taken a photograph of the piece at that point.  Sadly my excitement dragged me on and I got busy with my mica powders.  I used three different colours of Mica.

I’m kind of glad that I worked so quickly because the Polyfilla was REALLY quick to dry.  It says on the tube that it will dry in around 60 minutes.  But … this is a really thin coat which I applied to the card,  and add to that: the card is porous,  so it takes up the moisture in the ‘filla very quickly and so it dries faster.

The image was only just damp by the time I’d got the tops off my Micas and began to sprinkle and drop colours where I wanted them to be.  I left this project alone then for half an hour – just to make sure, then took it outside and huffed and puffed the Mica off the card and onto the garden. (It now looks like a fairy has flown by out there. lol)   I stood there in the garden with eyes as wide as saucers saying (quietly and gently) a long drawn out “Oooooooooooohhhhh!“.

Back to the craft room  … I had an idea and wished that I’d have thought of it before I began: …

I’ve recently invested in some Lindy’s Stamp Gang products and wanted to spray the background with one of the Starburst sprays (in a blue colour called Azure Sea Asters).  These are the most magical, incredible shimmery sprays, and each of them has a two toned colour to it.  (I’ve only had these products for a short time but I’m so impressed with them.  I also have some of their embossing powders and the colours are amazing!)

I’ve tried to capture the colours by changing camera angles but haven’t managed terribly well.  This is another shot of the Jellyfish, with the flash on.

The products I used for creating the Jellyfish are shown below:

Filled with creative excitement I had to make something else with the Polyfilla  ….

This time I planned it a little more carefully and used my Lindy’s Stamp Gang Starburst Sprays on my cardstock first.  They don’t take long at all to dry and are delicate colours when dried.

Using a Sweet Poppy stencil, I got to work on my second ‘go’ with Polyfilla.  This one was a little more tricky.  There are some tight corners and slight space/gaps in the stencil which meant that the ‘filla had a job fitting through adequately to actually stick to the page.  I did my best at filling the holes and gaps, but when I removed the stencil some of the Polyfilla came away with it.  The spaces were so tight.

Undeterred I continued with my Mica Powders.

Once the Polyfilla was dry I used a grey and a dark brown very fine liner pens and carefully ‘drew’ in the shadows of this stencilled picture so that I could ‘add’ the details which were missing.  Once this was done you didn’t notice that the filla wasn’t actually there.

The products used for this project are pictured below (minus the Mica Powders, which I forgot to include)

I’m not sure at the moment what I’m going to use these two projects for, maybe a card, maybe part of a scrapbook page…  but when I’ve made what-ever it is, I’ll be sure to share it/them with you.

Oh … I forgot to say …  I finished them both off with a little bit of Rub ‘n Buff in Gold.  Just to bring a little zing to them and highlight them a little, and also to add a little bit of a ‘puff of magic’ to the tops of the seed heads.

Well that’s me done and dusted.  If there’s anything I’ve forgotten to say or anything you need to know more about please just ask.  I really don’t mind sharing information about anything crafty I’ve done. 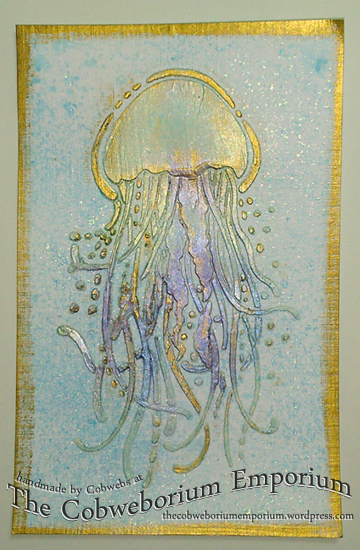 I’ll leave you with the Jellyfish so that you can think of cool sea waters, lapping around you as you stand up to your shoulders in the most incredible blue sea water, with the heat of the sun playing around your shoulders.  You turn to see a waiter standing on the water’s edge with a long cool drink on a tray, and you hear the tinkling of the ice on the glass.  Oh, I forgot to say that you’re a beautiful size 6 or 8 (British size) and as you walk out of the sea, you’re dressed in that same bikini which Ursula Andress wore in the James Bond movie Dr. No – only you look even better because …. well .. because you do!

And now you’re in that wonderful state of relaxation and fantasy, I shall leave you with these words….

Have a wonderful and truly blessed rest of your day my friends.  Sending love and creative hugs from me here in my corner of the world to you there in yours.