I loved making this Christmas card.

I wanted to make some night-time Christmas cards  . . .  but I wanted ones which weren’t the typical  ‘cottage with the lamp in the window’ views, nor the:  ‘Santa driving his sleigh across the moon’ type of thing.   These sorts of card are really lovely, pretty cards.  But they weren’t what I had in mind to make.  I wanted to make something more ‘edgy’.  Christmas night sky – but with a difference. 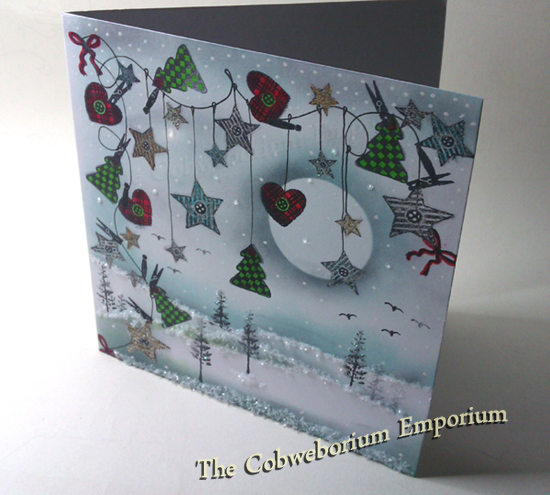 Made using only Card-io Stamps for the images on the card.  I began by first making a mask for the moon – which I cut from a post it note, using the sticky part of the post it as part of the circle, so that I could attach it to the card without any fear of it marking the card when I removed it.

After getting the moon in place, I then ‘put in’ the snow drifts and then stamped some trees.  I added the birds flying in the sky, and then chose a black fine tipped pen and drew a swirly line around the left hand side of the card and across the top.  To this I ‘pegged’ some stars, (in three sizes), some hearts and some Christmas Trees.  The hearts I coloured in red, the trees in green,   and the stars:  I coloured some in icy blue;  some in Gold glitter from a Glitter It pen, and some in sparkly Silver, again from a Glitter It pen. 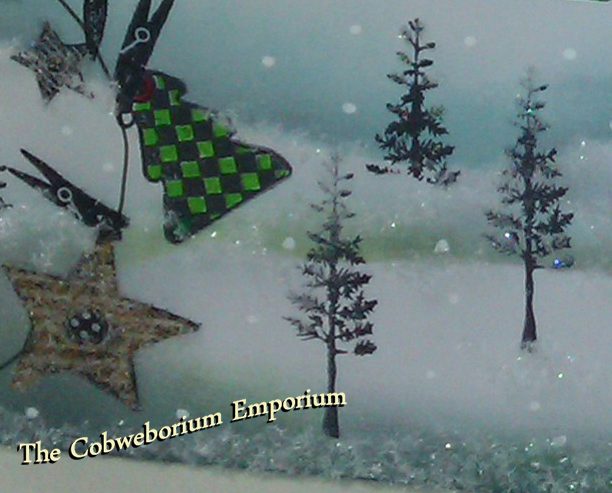 I then added ‘snow’ to the snow drifts – using Pinflair Glitter Glue and Pinflair Snow Dust.  (see close up, above, of a section of the card so that you could see the Snow Dust).  I then took a fine tipped glue pen and added some tiny dots of glue, which I sprinkled some glitter dust on to make twinkly dots in the sky.  Finally, just to finish the night scene off, I used a Graph It marker in White, to add ‘snow’ dots to the scene. 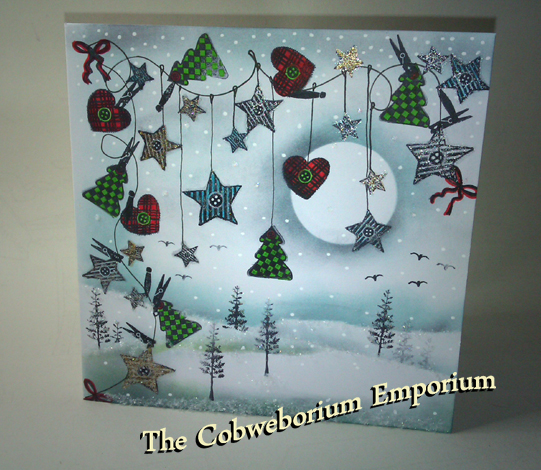 This card was seriously simple to make, and I really like the way it turned out.

I pretty much think I’ve told you everything I’ve used to make this card as I was walking you through what I did to make it.  The only things I think I’ve left out are:  I used Whisper Archival ink pads in three shades of blue and also in a sage green (only the teeniest bit of this).  I also used Ranger Archival Ink pad in black, and used Staedtler fine liner coloured pens to colour in the trees, stars and hearts.  Finally – the glitter I used was from a collection of glitters by WOW.

If I’ve missed anything and you want to know just ask using the comment box.

Thank you for coming and visiting.  I’m always so thrilled when I get visitors, and even more chuffed beyond measure when someone leaves a ‘like’ or comment for me, so please feel free to comment away!

Wishing you a thoroughly lovely Thursday.  Have a good one!   ~ love ~