Bonjour mes amis!  (translation: ‘Hello my friends’).  Ok, that’s about ‘it’ for my schoolgirl french that I’m going to try to impress you with.

I’ve been playing with clay again  (in case you hadn’t guessed).  I actually started out with the intention of making some little-whittle mushrooms for another project I have in mind, but by the time I’d got my clay on my desk, modelling tools all lined up (well, ok, thrown in a jumble onto my desk), my water spray bottle,  and the various other bits and bobs which come into play when modelling/sculpting with clay,  the mushrooms had grown in size and character, and fired by a random memory which popped into my head of some grumpy faced mushrooms I’d seen quite a while ago, (link Caroline McFarlane-Watts <—clickable safe link).  Then the idea grew because of a song which was playing on the radio, I began to think I would make some ‘Mushroom Folks’ (as I’ve Christened them), but doing them my style.  Happy and joyous.  And, from that initial thought, Monsieur et Madame Champignon were born.

Please allow me to walk you all around the home, and friends, of the handsome French Chap and his beautiful Parisian wife . . . 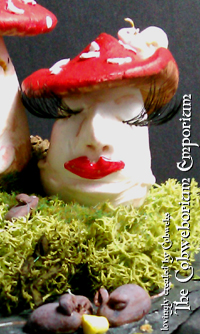 Madame Champignon is a well dressed lady, as you would expect, with a swanky french hat complete with snail. And, as you may have noticed, she has the longest of long, silky eyelashes, ruby-red lips and a little rouge to her cheeks.  So Chic! 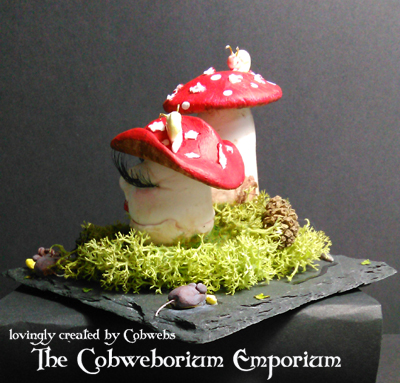 They sit atop a small mound of grass surrounded by moss – which allows other creatures from Fairy Wood to hide, and they keep the romantic couple company.  There are mice (who love to eat the left over bits of Camembert and Roquefort which picnic makers drop). There are also two slugs, (complete with tentacles) who leave the most delightful shiny trails behind them, and will sometimes have a game of ‘Guess what I’m drawing with my Slime!’ with the Champignons. And of course – there are the two snails, which the the French couple allow to clamber over their hats – although as they climb up to the hats, they do have the tendency to tickle the Monsieur et Madame, and Madame giggles quite audibly.

The curled and ‘frilly’ bits on both of the mushrooms aren’t mistakes.  They’re the bits you sometimes find on your mushrooms which you buy from the greengrocers or supermarket.

There are other little dints and dents on them both …which are there simply because I looked at some mushrooms in the fridge closely and saw that each one had its own character lines … so the Monsieur et Madame have their own dints and dents to add character too. (They also have ‘dirt’ marks –  as you would expect!)  😀

The Monsieur has a lip …. and a half!  As I was creating him I began to think of fabulous French men who I knew from movies … and the one which reigned supreme was Maurice Chevalier, who my mother was all dreamy and doe eyed about.  Inside my head I could see how he used to extend his lower lip, and from there …. Monsieur’s own lip developed.

I’ve been told that Monsieur Champignon calls his wife  “My sweet, my darling, my one true love!”.  ❤  Somehow, I feel that this is probably true, for he looks like he would,  don’t you agree?

The whole scene is set upon a small piece of slate

I had SO much fun making this happy couple of romantics and all the way through the creating process, I kept on singing ‘I Remember it Well’ – sung by Maurice Chevalier and Hermione Gingold in the fabulous film:  Gigi . . .  eventually I went to YouTube and found it, and played it while I was sat at my desk, so that I could be reminded of the words.  I share it with you here:

Thank you so much for coming and sharing a coffee moment with me, and to meet Mr. & Mrs. Mushroom.  I hope you liked them, and that you got a smile from them.

I love to know that you’ve visited, so please do let yourself be known and leave a comment and / or a like if you’re a little shy.  (But don’t be shy … we’re all really lovely people here on this blog).

Wishing you a truly magical Monday.  May the weather be calm and beautiful where you are.  May life be treating you kindly … and may you find contentment hidden in the folds of the hours as they pass by.

Much love to you, from me in my corner, to you in yours  . . .  have a blessed rest of your day my friends!