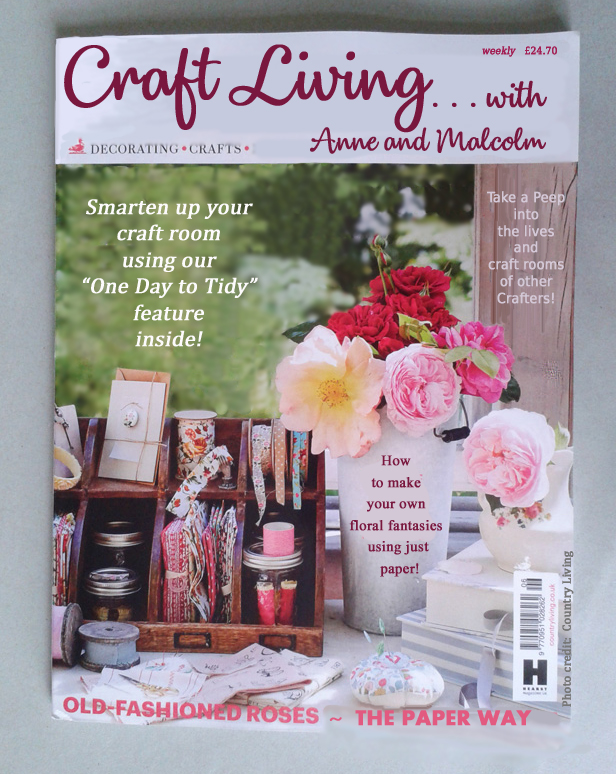 Some of you will recall that I’ve posted ‘Craft Living with Anne and Malcolm’ twice before, and so know that all the photos/pictures are all about having a bit of a giggle about something(s) that you might have normally not noticed about a craft inspired photograph.

If you haven’t seen the firs two of these blog posts, you might find that having a read of them first will give you an idea of what to expect in this third instalment.

You can find the first Anne and Malcolm post  HERE No.1  (it will open in a new tab for you)

The second Anne and Malcolm post can be found HERE No.2 (again, it will open in a new tab).

Anne and Malcolm aren’t myself or Mr.Cobs  –  however, they do have their feet placed firmly in our joined at the hip sense of humour.  (except my humour is far cleaner than Mr.Cobs,  and doesn’t involve swear words (very often) and most certainly has nothing to do with  f.a.r.t.s  or blowing raspberries either!)

Anne and Malcolm are a figment of my imagination.  They are two people I  ‘made up’  in order to share something which tickles the heck out of me – that being viewing a photograph and the ability to see something funny; odd; weird; strange; ticklish…  which, the moment I’ve seen *that thing*, I instantly give voice to describing it.  And …  I simply brought that voice to the blog here in order to [hopefully] cause you smile.

There aren’t nearly enough laughs to be heard in the world right now, so have some fun with these, and share them too.  Let’s infect the world with a bit of laughter!  😀 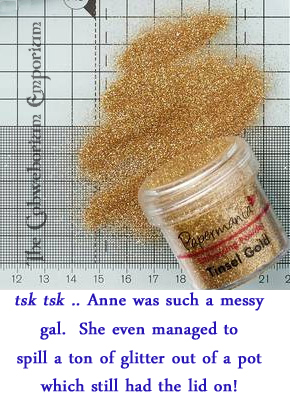 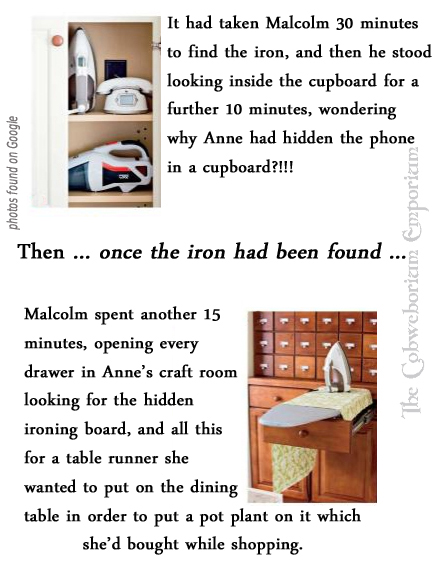 Well, what did Malcolm expect Anne to put the pot plant on…  a pillowcase off the bed??  Good grief! 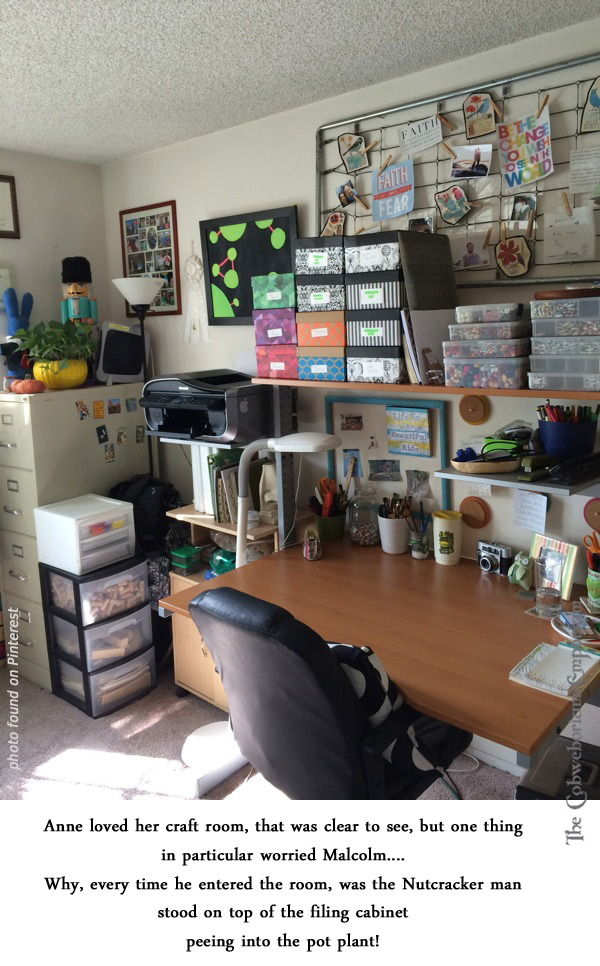 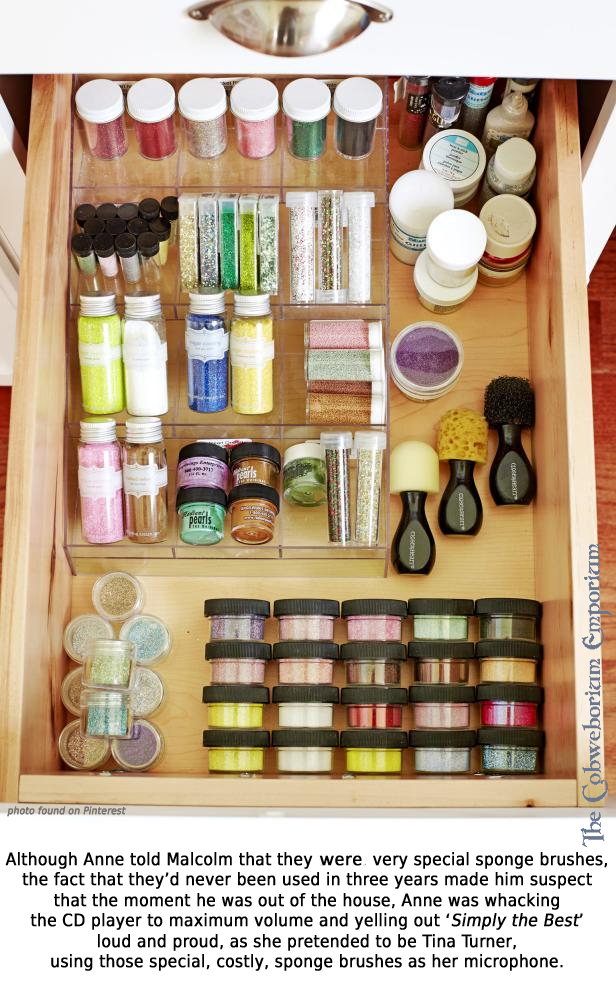 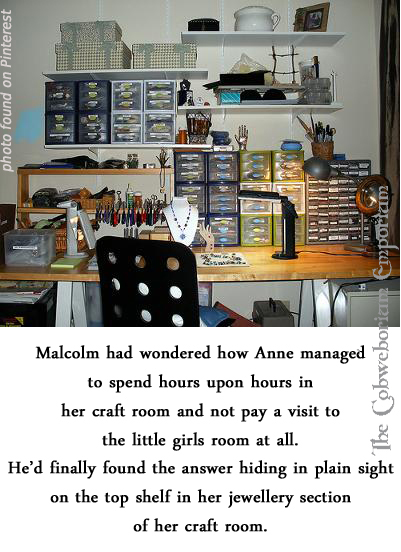 Personally, Mr. Cobs lives with the belief that I have a bladder the size of Lake Titicaca! 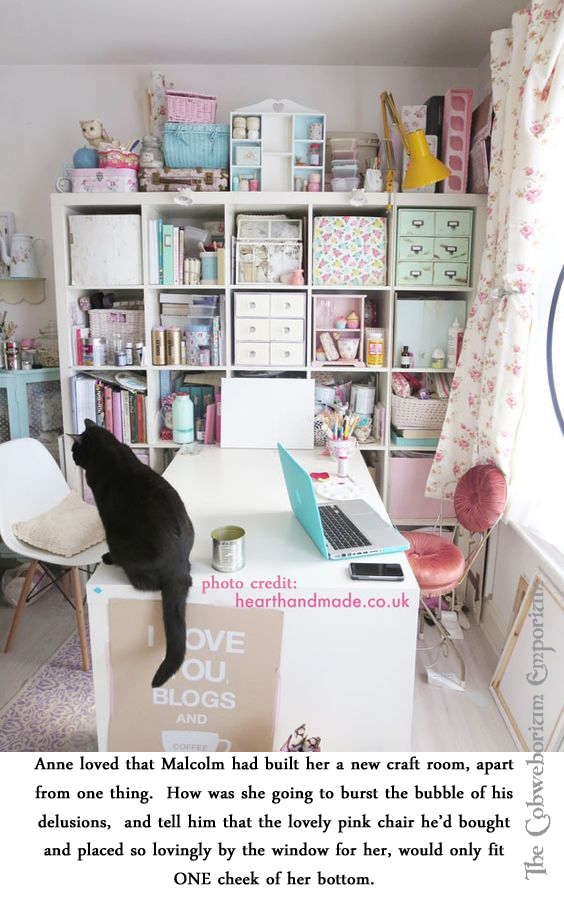 ….  Nice to know that someone else has that problem too.  🙂

Well, we’ve turned over a few more pages of the  ‘COBWEB CATALOGUE – life with a Crafter & her Spouse’.   Y’know …  I don’t think we’ll ever get to the end of that Catalogue – there seems to be an unending amount of pages in it.

I will be truthful and say that I love this adorable pair.  They’re obviously made for each other.   But both in need of getting out more.

Thank you so much for coming and having a bit of a giggle with me.  Do remember to share the smiles with your friends (send ’em a link in an email) or re-blog for your own blog followers.  We really do need more smiles going on in the world right now, so let’s form a chain, eh?

Wishing you a happy, contented weekend.  Sending squidges and buckets love, to you in your corner,  from me in mine.  ~

We first met Anne and Malcolm a few weeks ago (if you missed the first post you can find it HERE), and now they’re back again for another visit, to share with us all their unique observations on Life living with a Crafter via the use of photographs.

For those who haven’t ‘met’  Anne and Malcolm,  then  . . .  Crafters, Ladies and Gentlemen … May I introduce you to Malcolm and Anne. A glimpse into the exciting world of Crafters and their spouses.

(Anne and Malcolm exist solely inside my imagination and for the purpose of…) . . . .

of a Living  (in my imagination)  Crafter & Spouse 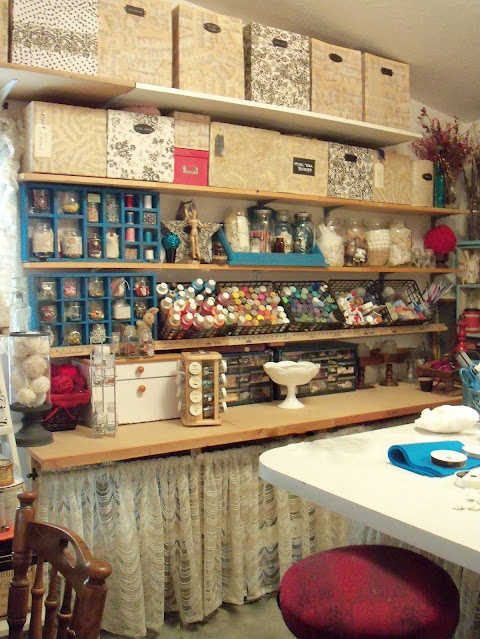 Malcolm loved that Anne was so happy in the craft room he’d ‘built’ for her, but one thing didn’t go down well with him at all.  The Voodoo Dolly strapped to the big star.  He wished with all his heart that she’d part company with that, because it gave him the heebie-jeebies and he didn’t like to go into the craftroom to get any of his cooking spices which Anne insisted should be in her craft room.  It made him wonder exactly what sort of ‘craft’ Anne was practising! 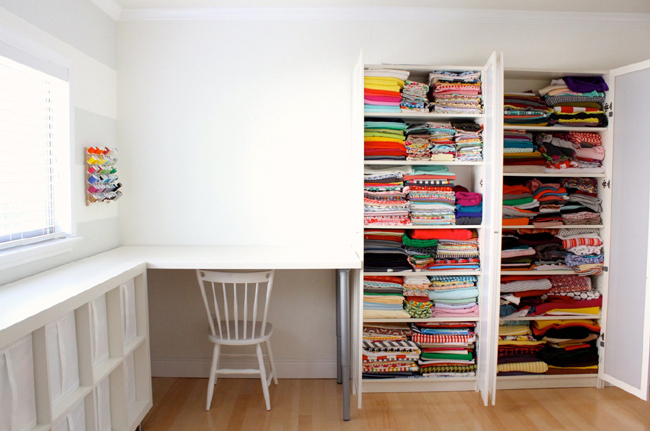 Anne had dropped (very) heavy hints to Malcolm, and even left brochures around the house  in the hope he’d get the idea about what she dearly wanted as a Birthday gift this year.  But on her Birthday, all he’d bought her was a wall mounted thingy-ma-jiggy-me-bob on which to store all her cotton reels,  and he still hadn’t noticed the lack of a sewing machine in her Sewing Room! 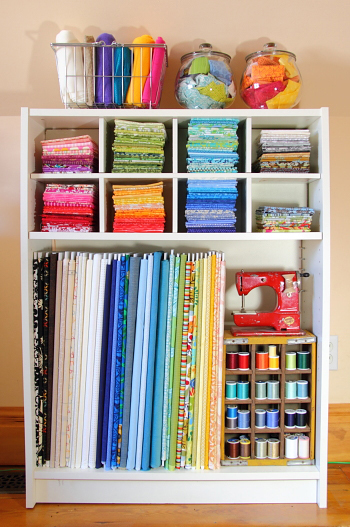 Anne was far happier now that she’d finally got
a ‘Naughty Basket’ for the fabrics which were
misbehaving,  and two Glass Jail Jars for those really
BAD fabrics who were the real trouble makers in
the bunch!  She was determined to teach them
a lesson! 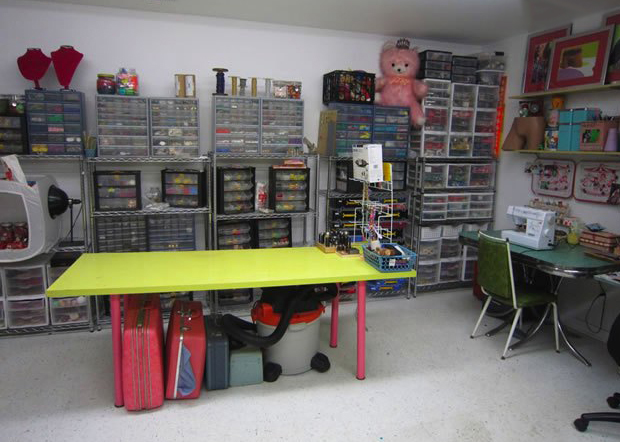 Back from their shopping trip, Malcolm took Anne’s new blue basket, filled with all the ribbons she’d bought that morning, down to her basement craft room.  That’s when he noticed the hastily packed suitcases under her fabric cutting desk.   The neighbours could hear that trouble was brewing in  ‘Chez Malcanne’,   as Malcolm climbed the stairs from the basement, two at a time, shouting:  “Anne!  ANNE!!”    with a rather cross tone to his voice. 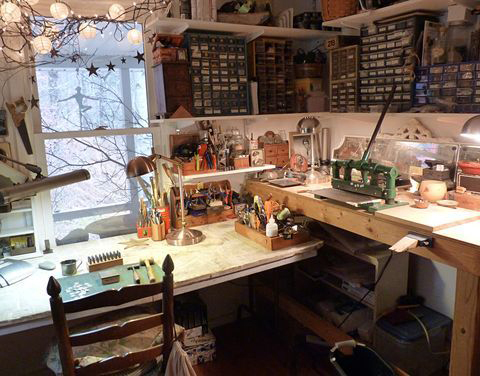 While Anne was away visiting her mother for a couple of days, Malcolm had planned to clean up her crafting room as a surprise for her upon her return.  He thought she’d love how clean and tidy it was now, and also thought she’d adore all the storage boxes with all their little drawers which he’d sorted her things into, and then spent four hours writing little sticky labels out for each drawer.  Sadly, we crafters among us know exactly what was going to happen the minute she stepped inside that door.  She would look around that room with horror mounting and registering on her face.  It was going to take her years to find all her lovely things – which despite what he might have thought,   were all in their correct places (for her) and she prided herself on knowing that she could put her hand on ANYTHING she required because she’d known exactly where it all was!  But not any longer!    Malcolm was going to be TOAST! 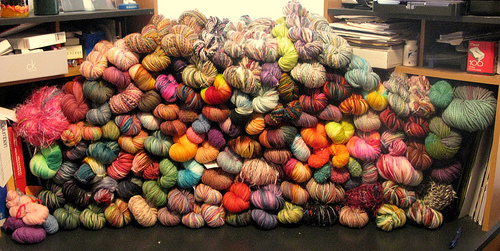 One corner of Anne’s Stitch, Knit and Sew Crafting Room was dedicated to what Anne affectionately called her ‘woolly life‘.  However,  Malcolm suspected that this corner had nothing to do with crafting, and instead believed it was a secret Breeding Programme.  The mound seemed to increase weekly, and yet Anne always laughed and denied it when he suggested to her that she’d been out buying more wool again.

Well,  we’ve turned over few more pages of the ‘COBWEB CATALOGUE of life with a Crafter  & Spouse’,  for a bit of Wednesday afternoon fun.  I hope they’ve raised a few smiles, a smattering of gentle laughs,  or even modicum of cheer.

Have a truly blessed rest of your day.

The photos chosen for this post are randomly chosen and found on the internet, so publicly available.   I sadly don’t know who the photos belong to, so if you are the owner of any of them, please drop me a comment detailing which photo is yours, and giving me a link to the original posting of it, and  I’ll be thrilled to credit you to the photo. 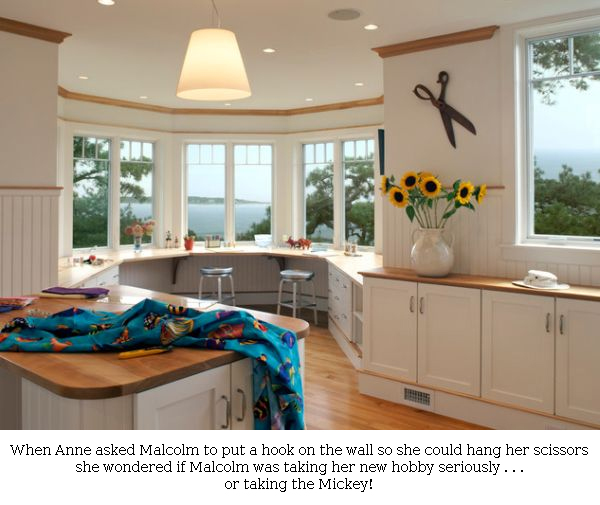 Some of you may be familiar with a website which has some great photographs taken from catalogues, to which they put their own spin on what you’re looking at and end up with  the funniest things which make me hoot with laughter.

Well, I have a confession …  when I look at pictures craft rooms, on the inter webby, I have that same thing go on inside my head.  I will fall in love with craft rooms, and gaze at them longingly – wishing that my craft room was *that* big, or *that* colour or *that* clean – but I know it’s never going to happen.  However .. after I’ve fallen in lurve with the craft room … I will then spot a little something which begins to tickle me.  From that tickle comes a bubbling feeling, like fizzing champagne bubbles going crazy around my solar plexus, and from that point on, all heck breaks loose and the laughter pops out.  Not normal laughing … noooo.. the type of laughing which has tears running down my face laughing.

Crafters, Ladies and Gentlemen … May I introduce you to Malcolm and Anne.  (who exist solely inside my imagination and for the purpose of…) . . . .

THE COBWEB CATALOGUE  ~  of a Living  (in my imagination)  Crafter 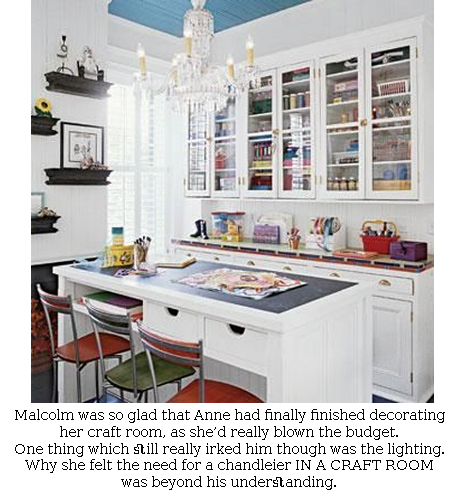 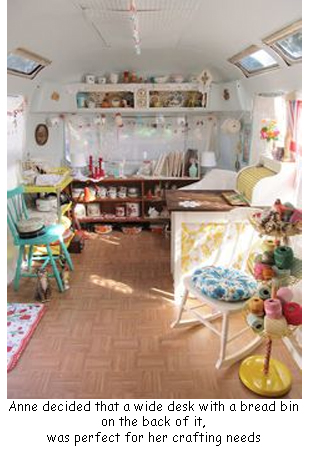 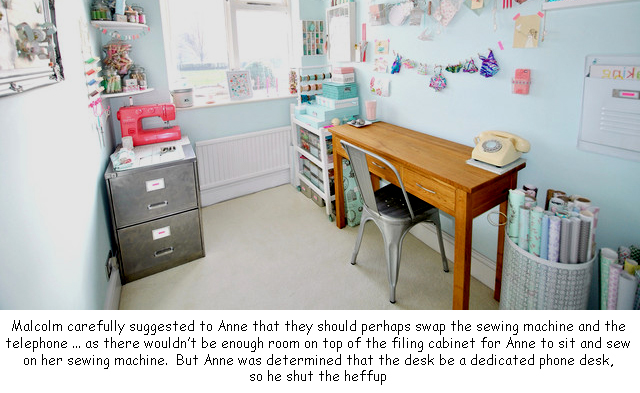 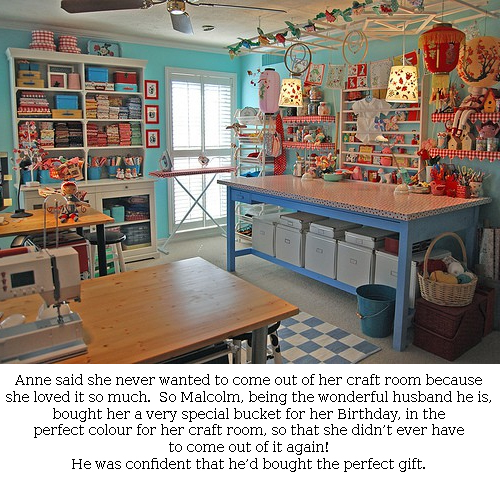 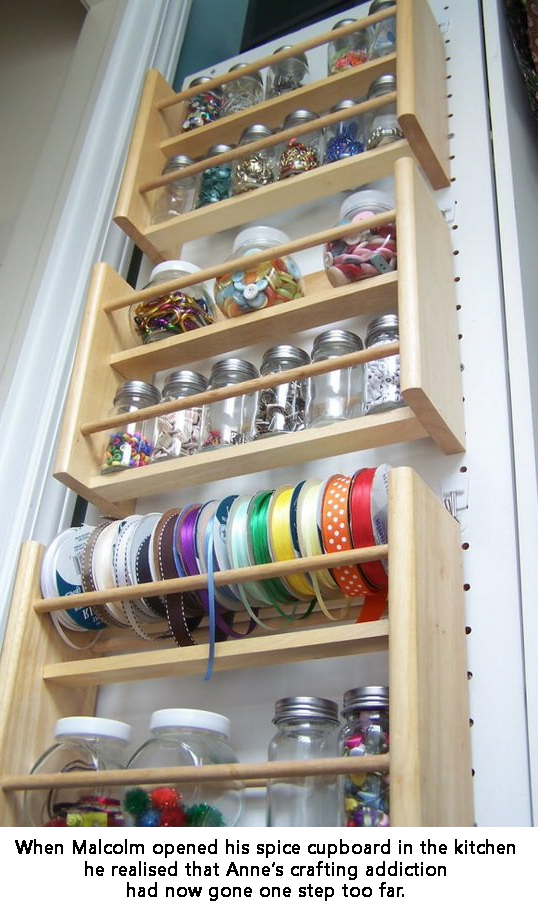 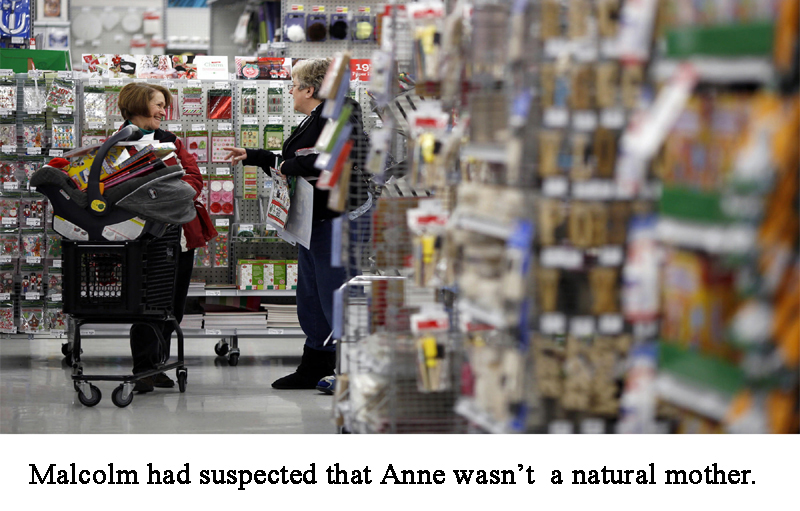 Happy Monday!  I hope that your chuckle muscle is in good repair, and that you’ve just given it a little work out.  Hopefully there will be more to smile about in your coming week.

Have a truly beautiful day my friends.  Let’s do it to them before they do it to us. (be kind that is).

Sending much love to you there in your corner, from me in mine.