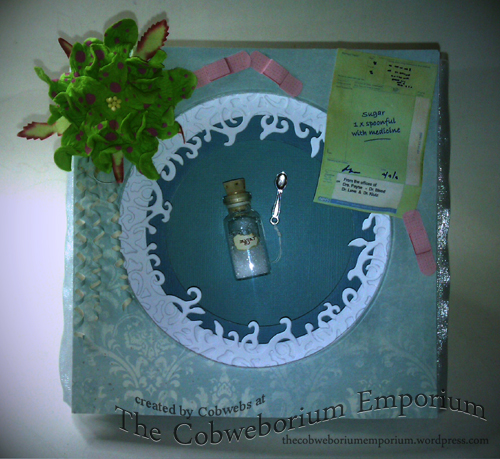 Go on, admit it.  You’re singing it now,  aren’t you?  <actually Laughing Out Loud to self here because I am too! fnar fnar.>

You’d think that since I’d been so poorly for the last … oh, I dunno – gazillion months?, (certainly seems that long), that I would have thought about making a ‘get well’ card sooner than this!  But no.  My brain just didn’t seem to switch on to this idea until a couple of days ago.

Inside my head I’d been singing the Mary Poppins song:  ‘A Spoonful of Sugar’  and thought this would be an excellent idea for a different sort of ‘get well’ card.

In my excitement I ploughed straight in and forgot to take photos of the ‘building stages’ – so the earliest one in the building process which I have, is this one:

The card was made using Tattered Lace Panorama Concertina Sides and Inners, which build up a card and give it a depth and ‘distance’ feeling by the use of zig zag folds on the sides of the card (are all die cut), which stay concertina’d,  and which have little slits through those zig zag bits, and help you to build up the layers on the card.   It sounds terribly complicated but once you’ve built your first one you suddenly see how easy it actually is.

As you can see in the photo, I used two shades of blue card to line two of the inner parts of the card, and gave the last ‘inner’ a bit of white on white treatment with the addition of a circle of ‘twirly bits’ using a Tonic die.

I then added the ‘front’ to the card – which I’d already covered in some Pion paper, and then got to work on the idea which I had in my head.

I thought the play on the words of the song  A Spoonful of Sugar  was a brilliant idea to use, so I went in search of my collection of little bottles and chose one which looked the right fit for the card, and once part filled, I corked it and added a teeny little label which I’d made on the ‘puter.  I paid a visit to my metal embellishments storage chest to get a teeny-weeny spoon, and then added them to the centre of the card.

At the same time I’d made the ‘sugar’ label on the computer, I’d also made some ‘plasters’ (or ‘band aids’ for USA folks), and a miniature ‘prescription’ which looked as close as I could get it to look like a prescription you’d see here in the UK, given to you by a doctor.  You can see just about half of it close up in the photograph above.  I added the plasters and prescription to the card front and then went on to choose a flower.  (Everyone who’s poorly should get flowers!)

But … what sort of flower?  Just an ordinary type of flower?  Noooo… it had to have something odd …  so … I chose a spotty Gardenia.  Measles perhaps?  lol  (flower by Anna Marie) 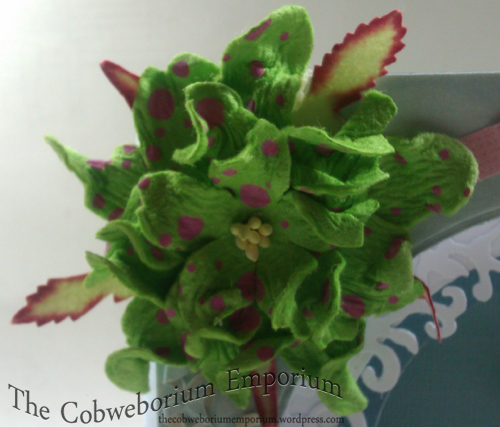 The little ‘twirly bits’ you see coming from beneath the flower are very fine cuts of the same Pion paper which is on the front of the card.  I twirled these paper cuts so that they spiralled, then just carefully pulled the spirals out so that they were just the right length.  They look so effective when seen with the naked eye.

These Tattered Lace die cut Panorama cards are cut in such a way that, once put together, they naturally stand up straight all by themselves.  However, because they’re panorama, if they’re up straight then I figured that unless your eye line is on a level with it then you won’t get a proper look at what’s inside, so I built a stand for the card and fixed it to the back, just in case the recipient wanted to have the card displayed at an angle.

In order for a ‘greeting’ to be added to the card I thought I’d add a tag (and because I love tags).  I cut some white card into a tag shape then covered both sides with some more of the Pion paper so that it matched the card perfectly. 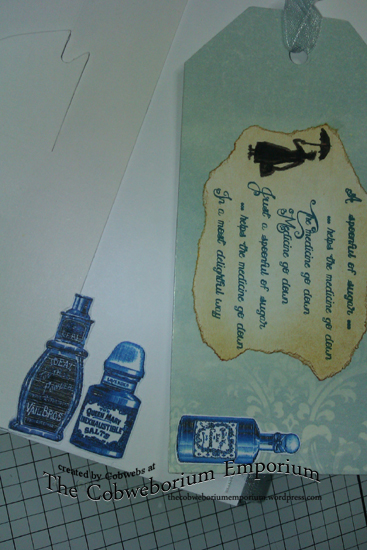 To one side of the card I fixed the words of the chorus from A Spoonful of Sugar, and added a little ‘apothecary’ type bottle (which I’d changed to blue on the ‘puter).

I left the other side of the tag just plain Pion paper so that a greeting could be added.

….  and then added two more apothecary type bottles to the back of the card, just to bring some fun onto what would normally be the ‘boring side’ of a card. 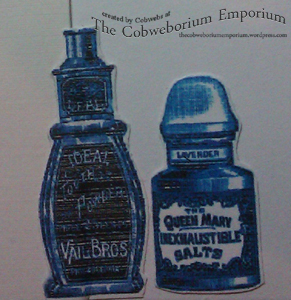 And that,  as they say in Television Land,  is all there was to it!

Oh!  Apart from ….  The Tattered Lace Panorama Dies do leave the sides of the card ‘open’ – so that you can see the clever mechanism which helped you make the card.  Now I don’t mind anyone knowing how I made it … but I just think that it kind of looks ugly.  To me it looks unfinished.  So, if you look carefully, you can just see how I’ve chosen to ‘cover’ the sides.  I use a toning blue shade of Organza ribbon, which I cut to the right length and then seal the ends (so that they don’t fray), and attached the ribbon to the sides of the card in order to give a more polished or ‘finished’  look to the card.  You could, I suppose, just use card, cut, scored and folded then glued into place.  So if you don’t have the organza then cardstock would probably work just as well.

Thank you for coming and sharing some time with me.  I really love your company, so thank you so much for coming to take a peep at this card.  I hope you like it as much as I do.  It was a really fun make and didn’t take long to get it all to come together.

Have a truly blessed rest of your day.  Sending you a crafty squidge ~