Thank you all so much for joining in the fun of the GIVEAWAY for the Home Under the Dome, which I shared with you in the last blog post

I closed the Giveaway today, and then collected all the names.  Each name was allocated a number based upon the order in which they entered their name into the GIVEAWAY.

These are the names, along with their allocated numbers: (where possible, I’ve added each name as a link to their own blog, so that you can go and visit them and perhaps make a new friend!)

I then asked Mr.Google for it’s Random Number Generator, which it duly gave me, and I asked the RNG to pick the winning number from and including No.1 –  up to and including No. 11.  I clicked the ‘Generate‘ button,  and it chose . . .

Daisies, I’m thrilled to be posting the Home Under the Dome to you.  All I now need is your snail mail address so that I can post it.

I think you and I have emailed each other once before, so I’ll have a search through my emails to see if I can find your email address, and once found, I’ll drop you a note so that you can send me your snail mail address.

Many, many thanks to everyone for joining in.  Giveaways make life just a bit more fun, and shines a bright spot in days.

There will be another Giveaway very soon …. but I won’t tell you when, or what for, or why.  So keep watching … you really won’t have to wait too long.  😉

And tomorrow …. there is a blog post heading your way – (if I can get the darn photographs taken), – which I think will not only make you smile, but possibly even make you laugh out loud, and maybe even squirm and squiggle just a little.  😀   *Cobs – tsk tsk,  that’s enough.  Don’t give it all away!!*

But, for today, this glorious Sunday which has been gifted to us all  . . .  May your day be peace filled, touched with joy, and sprinkled with happy.  May you leave any troubles outside the door until tomorrow, and may love fill your home and heart.

And …  stay as awesome as I think of you as being.  Because you truly, really are.

Much love and many squidges, from me in my corner to you in yours. 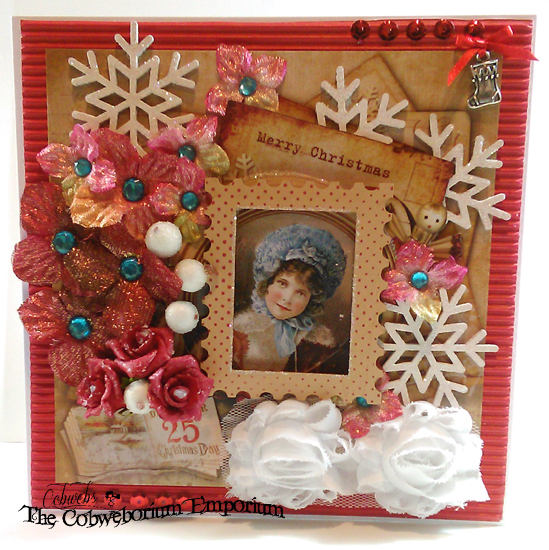 I still have the Christmas Crafting Box out next to me on the floor where I’m sitting at my desk…  and since I was still in the ‘Christmas’ frame of mind from the last card I made, I began this card (above) on Friday afternoon, . . . but then Little Cobs (Grandson) came on Saturday, and, just like any fabulous grandchild does, he shares with me all the germs he’s caught during the week at school (he’s 5), and this week he shared the germs which gave him an ear infection – however they changed somewhere in the passing and gave me a temperature and made me feel like a wilted weed!  I woke up at 3am gasping for breath and absolutely drenched.  I have no idea what my temperature was but I’m pretty sure someone could have fried an egg on me had they tried!

Thankfully things are getting back to normal again, but I really think we should build a sheep dip at the front door so that we can dip him in antiseptic before he crosses the threshold in an attempt to remove all the germs he’s bringing with him!

Anyhoo  … I’m supposed to be talking about this card so I’ll get on with it.

Made on a 7″x7″ white card, using some Red Corrugated card as a layer to bring the Christmas colour into the card. 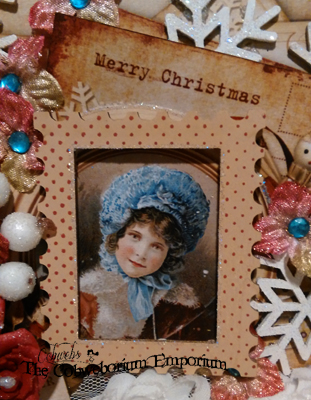 I bought a pack of decorative papers last year, with Christmas images on them and hadn’t used them.  There were 2 of each design in the pack.  And it was this little girl, in her new blue bonnet which was so sweet that I chose her to theme this card around.  I used both sheets of this design, layering one sheet onto the Christmas Red corrugated card, and then cutting into the second sheet in order to pick out some details and over-lay them using foam tabs, so giving depth to the card.

The large snowflakes are wooden ones, which I painted white, and while the paint was dry I gently sprinkled a little fine glitter over them so that they would have that more ‘frosty’ look.  The Red/pink four petal flowers around the left side of the card, I actually picked up in a charity shop about a year ago.  It looked as if someone was clearing some of their stash from their craft room and I found these flowers.  Didn’t know what I was going to do with them, but at 75p for a large cellophane bag full of them, I decided to buy them because I knew I’d use them at some point.  And … look!   I am!

I added the blue ‘crystal’ centres to the flowers, in a nod to the colour of the bonnet which the little girl is wearing.  I wanted a ‘conversation’ to be going on between the colours.

The little wooden frame is one from a selection by Docrafts, and the sequins are from my stash.  To finish the card off,  I added the little silver metal Christmas Stocking Charm (right top corner) with a Christmas Red Ribbon tied to it and … that, as they say, is all there was to it.

If I’ve missed anything or you want to know about something, please just ask away in a comment.  I promise I’ll reply.

Well Halloween came and went, and I was rather happy when the day had drawn to a close, because we had out busiest Halloween night, EVER, and I only had three bags of sweets left, and had begun to panic.

I went through my whole supply of cellophane C5 size bags and had none left!  I’d begun by making  about 12 cellophane bags, each filled with either a sucking lolly or a (drumstick) chewy lolly,  plus a pack of parma violets; a Roses chocolate;  a humbug; a chocolate eclair;  2 chocolate Ghost;  2 chocolate eyeballs;  and two chocolate coins.  We thought, judging on previous years, that those 12 bags filled with assorted sweets would very likely be enough.  Oh how wrong were we!

After just ten minutes I had to throw more bags together as fast as I could,  but before I’d managed to finish the doorbell wrang again and I had to leave Mr. Cobs to seal the bags up, while I kept the little ones and their mummies and daddies talking at the door (admiring their costumes and having a conversation about how wonderful the Princess’s were, and how scary the ghosts and ghouls were), while Mr.Cobs quickly sealed the bags and scrambled out to the door to bring me more supplies.  And that happened again, and again.

Sometimes there was just one little darling with a daddy or mummy, and sometimes there were five.  On one visit, there were five little ones, three girls and two boys, and as I was talking to the little ghostly bride she was doing a familiar jiggle.  I bent over and whispered in a stage whisper (so that mummy could hear what I was saying) …  “Oh Beautiful Ghostly Bride … do you by any chance need a wee?”.  “No,  no I don’t.”   ….  “You don’t?  Are you sure poppet?”  …  “Yes I’m sure…..  Uhm . . .   Actually …. I do!“   The jiggle had got ever-so more jiggly.  Mummy stepped forward and said … “Oh dear,  I think she does, yes”. So … not only did I have ghosts and ghouls at the front door on Halloween …. I even had a spook in my bathroom!  And I noticed that the jiggle had gone by the time she collected her bag of sweets from me on the way out of the front door.  lol.  Bless her heart.

They were all so, so lovely and so very sweet.  I couldn’t pick a favourite out of them all if I tried to.  I just wanted to scoop them all up and squidge them  …  which I think was because I was missing Little Cobs – who was still suffering with his virus so sadly couldn’t go out Trick or Treating.  Ah well … there’s always next year.

Aww anyhoo …  HAPPY WEDNESDAY all!  May your day bring with it some smiles, and a sense of peace with it.  May any mail you receive from the postman/lady be of the happy type, and may you find a parking space, sat waiting just for you, if you happen to go out in your car today.

Be good to yourself,  and each other.

Sending you a squidge ~