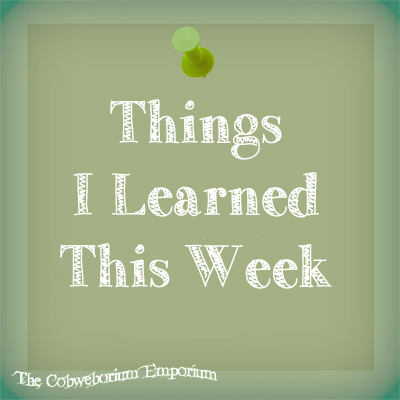 Friday has come around all too quickly in Cobweb Towers. Y’ know . . .  I used to laugh at my Grandma when she said (in her Lancashire accent)  “Eee, the days fly past so quick!  I wake up on a Monday and by the time I’ve had a cup of tea, it’s Friday!”.

Then as my Mother grew older, she too would say similar things, and I told her that she’d turned into Grandma!

And now … I’m saying those same things too.  Where has the time gone?  When did I grow ‘old’?   I didn’t notice time slipping by.  Was I too busy?  What on earth was I doing which made me not notice that I was growing older?   I used to laugh about the Grey Hair – I actually even liked it.  It added hi-lights to my dark hair.  But … I swear I’m not actually as old as my birth certificate says  … because I still feel like a child.  My inner child is there in everything I do or say.  Very much in evidence.  When someone is not nice to me, I still cry like a child would.  I have a belief that everyone surely is nice . . .  (and yet … the news tells me a totally different story!).

I used to laugh about me saying things my mother used to say, and I’d tell our two girls:  “Oh my goodness I think I’ve swallowed Nanny!  She’s just popped out of my mouth!”  …  and they’d laugh their funny, chuckling, little girl laughs.

However …  I noticed a few years ago that both of my beautiful daughters had begun to have my  sayings ‘pop’ out of their own mouths, and I’d laugh as I told them to  “be careful girls …. you’re turning into your mother, and you really don’t want that to happen!”.    And yet, it’s the funniest thing –  because,  for some strange reason that I really can’t fathom, they seem to always be just a tiny bit pleased that they’re hearing me ‘pop’ out of their mouths. They hear themselves saying the very things I used to say to them when they were growing up and they appear to like it.  It kind of tickles them in some odd way.   [shakes head and chuckles to self].

As I said, it’s Friday and we all know what that means …  it means that I’m sharing with you the things I learned this week.  So … are you ready?  Here goes:-

And there you have it.  Things I’ve learned this week.  Not entirely sure what I’m going to do with these ‘facts’ but at least I’m full of … what? …  knowledge? …  things?  …. stuff?  …. well… I’m full of something and it’s not what Mr. Cobs just suggested!!  tsk tsk.  He’ll be spending five minutes on the naughty seat for that little bit of bad behaviour.  If he carries on, I’ll phone his mother, THEN he’ll know what trouble looks like!  🙂  Mrs. Cobs Snr. loves me.  She tells me so every time I speak to her.  (I think she’s just grateful that someone took ‘himself’ off her hands!) fnar fnar.

So …  Is there anything you’ve learned this week?  Maybe some fun stuff?  Or … have you:- Done stuff?  Bought stuff?  Won stuff?  Anything?  I’ll pour the coffee … you tell me about it, and we’ll share a laugh or two between us.

Have a wonderful weekend my friends.  Remember to make a memory as you go about your days.

Heaps of love and squidges from my corner to yours….