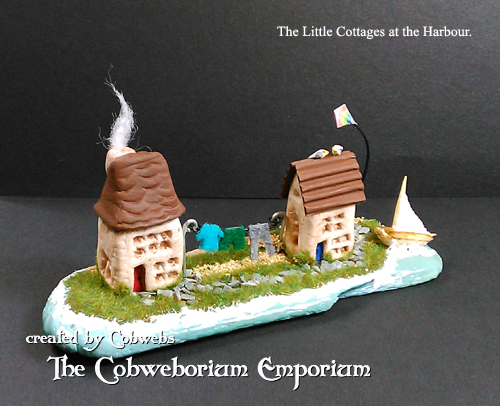 We have a saying, here in Great Britain, which is said to someone you haven’t seen for a time.  It’s:  ‘Well look what the cat dragged in!’,  and it seems pretty apt right now, for I haven’t been able to blog for almost 4 weeks.  FOUR WEEKS!  And …. I haven’t even brought a note from my mother either!  Tsk tsk. (more about why I haven’t been, in a minute).

Well … I’m here, dragged in by the cat (so to speak), and sharing a little thing I actually made during July.  I photographed it … and then couldn’t find where I’d saved the photos, so I’ve ended up photographing it all over again, so that I could come and share it with you.  It’s called:  The Little Cottages at the Harbour. 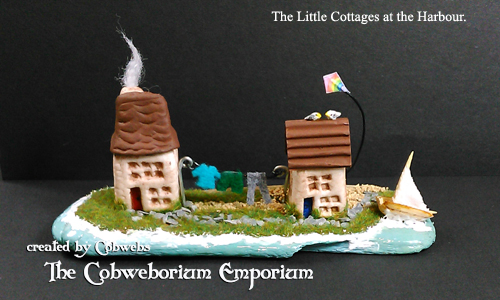 I have a small bundle of driftwood, here in my craft room.  It’s all incredibly lovely to handle – so smooth and has its own story,  a  life as being part of something else – I’d love to know what, but that’s a secret kept only by the sea.  The sea did what the sea does and made this wood something incredible, but now I needed to give a piece of this driftwood a new life to lead.

I sat with a little piece of it on my desk for a few days before finally deciding that it would be a base for some little fishing cottages that would be found by the sea – perhaps not quite as close to the sea as I’ve put them here, but a little artistic licence came into play in the creating process as I very much wanted to include a boat in the scene, so water was (obviously) a must!

The houses and the two seagulls (stood having a chat on the top of one of the houses) I made from clay.  The clothes hanging on the washing line were all cut by hand, from felt;  and the grass,  the slate pathway, the wet looking sea with its sea-foam, and all the other various bits and pieces, were all made from things I have knocking about my craft room, all stored in wee little pots, just waiting for their chance to pop out and play.

Of course …  the smoke coming out of the chimney is real.  [cough-porky pie-cough]  🙂

Well that’s the crafty bit over and done with … now comes why I wasn’t at school for ages.  So … if you only came to have some crafty joy, please stop reading now.  Those of you who are gluttons for punishment, read on….

An Alternative Note than one from my mother:

I shall put it all in as few words as I can:  An ongoing, long-standing medical problem is being a problem, but after six and a half years with my new doctors sending me for test after test;  so many x-rays I swear I glow in the dark;  huge great hollow needles being shoved into my hands (had to mention that one as it horrified me when I saw what they were about to do), which was testing nerve responses;  and so much blood taken from me for tests that I now put every phlebotomist under the one title of:  ‘The Dracula Brigade’ – …  I’ve finally been diagnosed with Fibromyalgia – which,  for those who don’t know what it is,  is a disease of the central nervous system.

For years I’ve been blaming my spinal injury (result of a RTA some years ago) for all these things that had begun to happen, and they were getting worse and worse and driving me crazy, but it was something else which was happening all the time!

Apparently Heaven is determined to get its hands on me and is wearing me down, one injury, one illness, one ‘broken’ bit at a time, until I eventually give in or give out!

Then . . . the dishwasher apparently couldn’t cope with life without the oven and it died of a broken heart.

Then . . .  Mr.Cobs, in his attempt to get the dishwasher out of the kitchen, manoeuvred it out of its hole which it lived in, (under the work top).  He got the machine out but then had to crawl into the now vacated spot to unplug the dishwasher from the hidden electrical socket …. and upon completing the unplugging task, he was backing out of the space …. thought he’d backed out far enough and . . .  lifted his head . . . only to find that he’d misjudged the distance and WHAM … he hit the top of his head on the underside edge of our wooden, 2″ thick work tops and cut his head open!

OH MY GOODNESS!!!  SOOOooooo much blood!  Clean tea-towel after clean tea-towel came into use and I folded one into a firm pad and gave it to Mr.C with the instructions of putting it on the cut and holding it firmly in place.  I managed to get him to a comfortable place to sit (I was scared silly that he’d pass out on the floor, as this is not a weedy chap we’re talking about here.  He’s a tall, meaty chap and there would be no way I could pick him up or drag him anywhere!

After asking him various questions (who’s the Prime Minister of our country.  What year is it.  What’s his date of birth etc) to establish that he was still in mental working order, I feared to look but knowing that I had to . . .  with torch in hand I carefully examined the site and found that damage was a small cut of less than half an inch!  From the amount of blood I honestly thought that there would be a huge gaping gap of around 4/5 inches.  I’d already planned to call an ambulance as I feared him bleeding to death if I drove him in the car to the hospital.

He suffered a bit of a headache (as you’d expect) but a couple of pain killers and sitting quietly for a while made him feel a little better.  And … the blood flow stopped … which I’m guessing is down to the amount of prayers I shot out of my heart and head from the moment I saw the blood dripping down his face.

Rest assured though dear reader, he is perfectly fine and totally groovy now.

Of course, while all the above was going on, normal life was also taking place – as it does – but somethings got left, pushed to one side, or put on the back burner, and sadly blogging was one of those things.  Sorry about that.

I don’t know what’s going on this summer.  Is it the heat?  Is it the fact that we in Great Britain aren’t used to this amount of ‘Summer’ happening all at once?  I have no idea.  I only know that this Summer has [personally] brought trouble with it and I’ll be really rather glad to see the back of it.  I’m looking forward to Sunday, 23rd September – for that’s the official date that Autumn begins here in the UK, and from that date I’ve decided that there will be no more trouble.

Autumn is one of my most favourite times and I’m in talks with God about how life hasn’t been very fair recently.  God, though, has an answer for everything – and says if not me, then who?  And I and my heart truthfully can’t answer that one.

Anyhoo . . .  I hope that you haven’t met with any problems or even disasters, which were too much for you to cope with.  Remember – into each life a little rain must fall, so don’t feel that you’re alone when something happens out of the blue which you would rather hadn’t happened.  I can guarantee that at least one other person reading these words as you read them right now, will have gone through pretty much the same thing and can relate to how you feel.

So  . . .  If you’re going through ‘it’ … we’re all standing right beside you, cheering you on and shouting words of encouragement.  You’re not alone.  We’re right here.

Thanks for coming and taking a peep at the Little Cottages at the Harbour, and having a read of this ‘diary entry’ for what happened in August!  It’s truly great to see you.  I’ve missed you all so very much.

Have a fabulous Monday and a truly blessed week.  Much love ~

57 thoughts on “Little Cottages at the Harbour.”