Although …  not going so big that you could see a ‘Home Under the Dome’ from Space.  I might be calling them ‘Mega Domes’ – but they’re still tiny. Small enough to put in your pocket.

Take a look at the measurements…  (the purple rule is in centimetres, but I’ve done the conversion into inches to help) . . .

The Home Under the Dome in the centre (above) is the regular sized dome that you’ve seen me make before.  (you’ll  find information about this little Dome later). 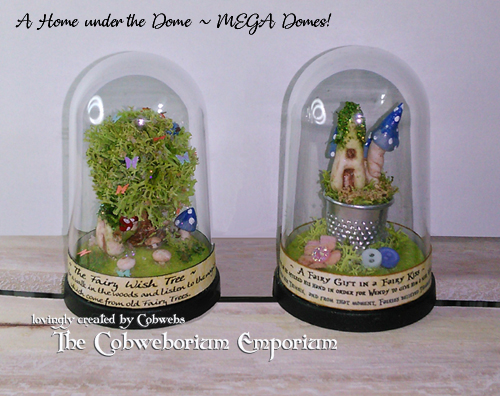 The Mega Dome on the right hand side of the above photo contains something very special,  because it holds a ‘Fairy Kiss’, and, of course, a Fairy Home[under the Dome] along with some Fairy Mushrooms and a few other tiny fairy things.  The Dome on the left hand side of the above photograph contains a Fairy Wish Tree as well as not one, but TWO Fairy Homes, and a bundle of Fairy Mushrooms.  Let’s take a look at that one first, shall we?

The tree really does have a tree trunk – but try as I might I couldn’t get it to properly show up in photographs.  The trunk is made from a piece of branch which fell from the humongous protected Pine Trees which are in my garden to the rear of Cobweb Cottage.

There are two Fairy Homes, and an assortment of Fairy Mushrooms – all freshly collected from Freckled Mushroom Wood ~ which can be found near to where I live – but is only known and shown to those who truly believe and enter with a pure heart.  If you look very closely towards the top of the tree, you will see the tiniest of Fairy Bluebirds, sitting happily in the tree. Can you also spot the really tiny multi coloured, sparkly butterflies?

What you can’t see in the photos above, is that the Fairy Wishing Tree was collected when there was a low breeze, and so it is held in suspension, or ‘frozen in time’, and bends slightly,  and the foliage still looks exactly as it did when the low breeze blew it – all blown and sort of ‘leaning’ in the same direction.  It looks like there is a gentle wind blowing inside the Dome. Magical!

The other Mega Dome – well that’s a special dome and possibly my favourite.  It contains a Fairy Kiss, which holds a Fairy Home and some Magical Freckled Mushroom.

It has flowers, and some teeny tiny buttons which the Fairies had collected and were using as stepping-stones up to their house.  Knowing that the Fairies wouldn’t mind, I gathered up just two of the minuscule buttons and added them to the base of the silver Thimble Kiss. 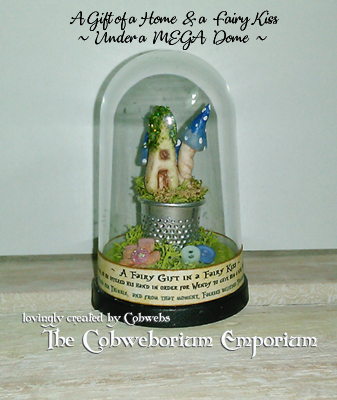 … The Fairy Kiss – is the Thimble you see holding the Fairy home and mushrooms.

Do you remember in the story of Peter Pan, the boy who never grows up, (written by Scottish novelist J.M.Barrie), who interacts with Fairies, Mermaids and Pirates (‘think’ Captain Hook!). Wendy Darling and Peter Pan became friends and wants to give Peter a kiss – which Peter thinks is the thimble which Wendy is holding, so holds out his hand to receive it.

That thimble from the story made a huge impression on me as a child and I grew up knowing that in reality, a thimble to humans, was a ‘kiss’ to a Fairy.

When my daughters were old enough to understand and treasure things – one Christmas I gave each of them a special gift from me of a silver bracelet (one each), which I’d had one tiny, real silver thimble hung on each of the bracelets, and when they’d opened their bracelets I shook my arm and showed them that I too had a silver bracelet with a silver thimble on it, and told them that wherever they might be in the world, and if I was ever a long way away from them, they only had to look at their bracelets and would see that they would always have a kiss from me.  They loved their bracelets, and the knowledge that they would always have a kiss.

Now lets deal with that tiny little Home Under the Dome which is in the middle of the two Mega Domes, shall we ?  . . .

This regular sized, tiny Home Under the Dome (in the centre of the above photo) is quite a special dome, and it’s up for grabs!

This tiny little dome is packed to over-flowing with charm and has some very special features.  There are two tiny homes under this dome, both of which speak of the quirkiness and fun of the Fairies who once inhabited the homes – for both are slightly different in that they are wiggly wobbly.  Bending and curving just slightly.   They’re …. different in a special way. 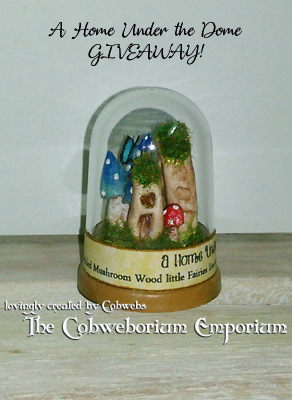 It was difficult to show you what I mean in photographs, but you can just about see in the photo above that the tallest of the two houses begins at ground level and then curves backwards and, had it been taller, you would have seen that it’s on it’s way back to curve the other way.  BUT .. if you then look at the smaller of the Fairy homes – that home also curves and in fact matches the curve of the taller house!  How do the Fairies know how to do that?!!!  [gasp!]

There are blue freckled Fairy mushrooms, and also one teeny tiny red freckled mushroom, all growing in the grass.  But … there is something very special that I haven’t included in any Dome before . . .

. . . there – in a ‘held in a moment of time’, is a tiny blue butterfly, which landed on a freckled mushroom, and is captured forever under the Dome.  This special Dome is now the subject of a Giveaway for followers of my blog.

If you would like to be the custodian for this Home Under the Dome, and you are a follower, all you need to do is:-

If you can’t find the comments box, then you need to scroll all the way to the top and click on the title of this post (‘A Home under the Dome 3 ~ MEGA DOMES!’) – and that will load the blog page this time with the comments box – which will show up at the bottom of the post.  (You can also read any comments other people have put too!)

Please remember that the Giveaway is only open to followers of The Cobweborium Emporium Blog.

I’m sure I’ve learned more than these things, but my one brain cell can only hold so much information, and when there’s too much going in it forces the brain cell to ‘evacuate’  some older things in order to make way for the new stuff.  (But I wish that it would hang onto passwords or at the very least be organised enough to stick post it notes to the inside of my skull!)

All that’s left for me to do now is to wish you a truly wonderful week.  May reality be better than your dreams!

Have a blessed day all.  Sending you heaps of squidges and lots of love ~