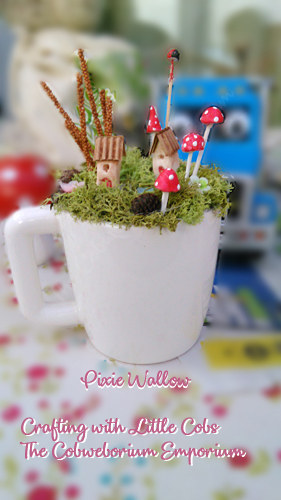 At my Grandsons, Little Cobs, school they have a ‘project’ which involves a teddy bear called Barnaby.  Each child in the class gets to take Barnaby the Bear home with them for a few days, and Barnaby gets to spend time sharing the family outings, games, toys, meals, visits etc., and the children (with the help of parents, guardians, grandparents) write the story of what Barnaby has been doing while he’s been staying with them.

And this is the [mostly pictorial] story of how Barnaby Bear came to visit Grammy and Grandad and joined in with some crafting with Little Cobs and his Grammy.

I’ve made little tiny things for years (and years and years – more than I care to own up to).  I love small detail.  And ... I used to make little houses, paint and attach them to various items and used to sell them for just enough money to cover the costs of actually making them.  Now about a month ago, Pinterest (that well known joyful time-waster) sent me an email with pictures of things it suggested I might like.  Among those photos were some little Fairy Houses which reminded me of the Fairy homes I used to make many years ago.  This gave me an idea for what I thought Little Cobs, and Barnaby Bear, might like to make, and the following photographs show you what happened, how it happened, who made it happen, and how it all turned out in the end.

Once upon a time, two and a half weeks ago, there was a boy, a bear, a mug and some clay….

It’s a really pretty plate – but not one we use for food.  It just sits around waiting for some passing crafter to blob paint onto it in order to give it a use.

A few small resin flowers were added, just for artisticness, (not a real word but it’s so ‘juicy’ that once I’d made it up I simply had to use it), a couple of teeny tiny pine cones and some general florestry bits – just to make it feel like home to any passing Fairy or Pixie who might be looking for a place for the summer.

I’m reliably informed that Barnaby was very happy with Pixie Wallow, and it passed the Inspection Test with a gold star! 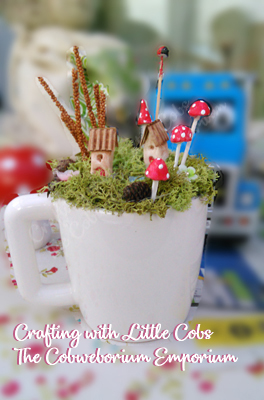 All the painting is Little Cobs own, apart from tiny bits where I showed him what he needed to do before I handed over the paint brush, and two spots on one of the Mushroom caps, just to show him how to get that magical ‘dot’ in the right place, in the right size.  He made the houses, the mushroom caps and was the ideas man for how the whole scene was to look.

Little Cobs, Barnaby Bear and myself had an absolutely great time making this.  Lots of laughs and lots of stories about who would eventually live in the Pixie Houses, and who would come and sit on the mushrooms and play in the garden.

Before I go may I share a surprise that I had a couple of days ago.  I got sent an Anniversary Achievement by WordPress . . .

…  four years!  FOUR YEARS I’ve been blogging, and yet if you’d have asked me I would have guessed about…  maybe 2 to 2 and a half years tops.  I can hardly believe it.  Four years,  and I’ve loved every single day of it, and that’s because I’ve shared it with you.

I’ve made so many lovely friends via my blog and have and am enjoying so many blogs which are owned by others.

So thank you, dear reader, for filling my last four years with joy and fun.  I’ve loved getting to know you and hope to continue doing so, and also hope to get to know all the new people who join The Cobweborium Emporium,  or that I find in blog land.

Thank you so much for coming today and sharing Pixie Wallow.  Have a truly blessed rest of your day.