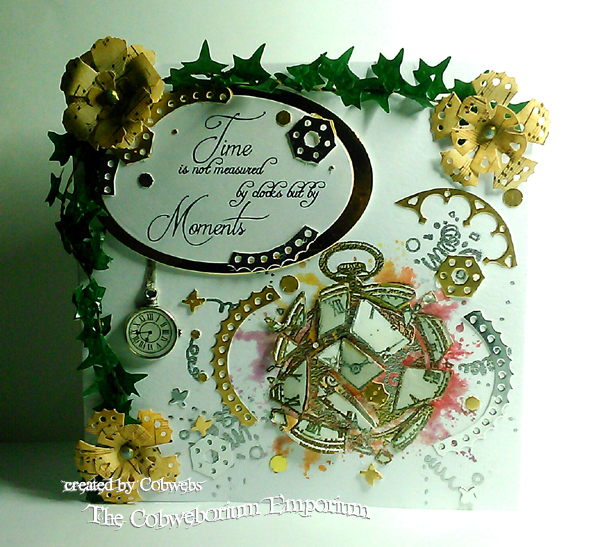 I have a fascination of/with time.  It’s not an obsession, but it’s been something to which I became more aware of about ten to fifteen years ago.  I can’t quite explain it…  well, no, actually that’s a bit of a porky pie.  I could try to explain it, but to do so would unfortunately give away something in my book – which I’ve been writing inside my head for .. oh – heaven knows how long!   And a girl has to have some secrets, so I don’t want to divulge them yet  … at least, not until I write my book first!

Because I have this ‘time thing’ going on, I thought last week,  that I should make a time card.  I had a sentiment in mind and had recently bought some new stamps which would fit perfectly with that sentiment … so I went to work.

I stamped four different coloured ink pads in a (sort of) circle onto my glass mat, then spritzed them with water so that they bled into each other and ran a little.  I stamped the ‘spoldge’ stamp into that watery mess and then stamped it straight away onto my card.  There was a little section which didn’t quite pick up enough colour, so I just used a paint brush to fill in.  You can see in the photo where that was – but I knew it wouldn’t matter as this was just to be the (kind of) background to what was to come …

After the ink dried thoroughly, I stamped the image of a Fob Watch which had exploded …

..  and embossed it part in silver and part in gold embossing powder.

This time though I didn’t do the explosion of colours behind it.

This was because I wanted to cut some parts of that image out and needed those particular parts to be crisp white . . . 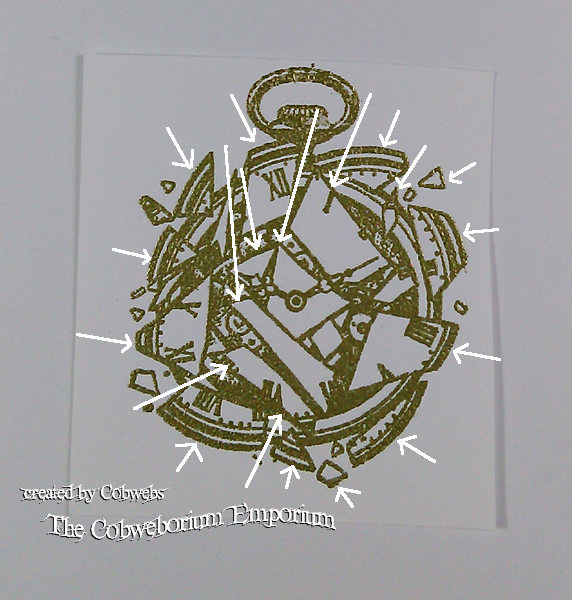 The white arrows in the above photo point out which parts I wanted to ‘fussy cut’ out.  This was so I could coat those pieces with Anita’s 3D Clear Gloss – because the parts I’ve pointed out in the photo above, would be the face of the clock…  and would have had the glass over them too – so I wanted to give those parts a clear glassy type finish.

By half way through I have to admit that I was beginning to wonder if it was such a great idea,  but I plodded on telling myself it would look fine and groovy once I’d finished.

Once cut out, I used the Anita’s 3D Clear Gloss on those pieces and put them on one side to dry overnight.

The following day they were dry and ready to go  . . .  so I fixed those pieces in place using Pinflair Glue Gel (what would we do without that gel, eh crafters?!).  But I put the pieces in a sort of ‘wiggly woggly’ way.  Some were tilted one way.  Some another way.  Some this way, some that.

You can’t quite see it here in this photo (above) but you’ll see it better in the final photo in a minute.

The sentiment I found some time ago and don’t know who it’s supposed to be credited to – even though I’ve searched the internet.  I think it’s just something which happened one day and there it is.  It belongs to us all (maybe).

It reads:  Time is not measured by clocks but by Moments.  I printed this out using my computer and Photoshop.  I knew how I wanted it to look, and had a font in mind … so built it then printed it out onto card, then matted it onto gold Mirri board.

I made the flowers from music sheet paper which I ‘vintaged’ with an ink pad and a duster brush.  The die used to cut them out was a large die of different flowers by Heartfelt Creations.  The added bits,  of cogs and parts of the clock explosions, were also cut from a Heartfelt Creations die, which I die cut using my Ebosser and three colours of Mirri Board, Silver Shiney Gold and Matt Gold,  and then the resulting die cuts I cut into to make the effect I was after.

This card, well ….  I very nearly opened my bin and plonked the whole lot in.  It took me sooo long to make.  Doesn’t look as if it did – but oh boy, it was all  Start.  Stop.  Start.  Stop.  I had to wait for glue gel to dry.  Ink to dry.  Work out the size I wanted the sentiment to print out – I only had a certain amount of space – so it needed to feel balanced.  Even when I finally said “Ahhhh.  Finished!”  I still had to wait till the next day to photograph it because the centres of the flowers have gold and silver Tonic Drops as their centre and they had to lay flat in order to keep them where they should be.

So yes..  I’ll admit that I was kind of glad this card was finally finished.  But … I’d still make it again. (I know… glutton for punishment.  lol).

I trust your Monday went well and that now you’re home (or when you eventually get home) that you feel that wonderful “Ahhhhh” feeling when you shut the door and kick off your shoes”.

Oh I remember that moment so well,  and will freely admit that I don’t miss it.  Although I’m not of retirement age,  (YAY) …  naturally – because as you well know,  I’m “Ooooonly 27“,  I am truly blessed to be ‘living the retired way‘ – even if very early on in life.  And no, it’s not because I won the lottery or have pots of money – sadly.  But if I ever do …. I promise you’ll be the first to know.

I’m glad to not have that horrible Monday morning feeling – which actually happens sometime during Sunday afternoon.  See …. not so old that I don’t remember that feeling.

I hope your Monday has ended with you having a smile on your face.  And remember … Tomorrows Tuesday … already on the way to Friday!  YAAAY for Fridays!

BUT . . .   For anyone who needs an extra smile today …  I’ve come complete with a joke.  It’s the tiniest bit naughty … but not really, because it’s your mind which will make it naughty.

A Joke For the Day

The Mole Family
A papa mole, a mama mole, and a baby mole all live together in a little mole hole.

One day, papa mole sticks his head out of the hole, sniffs the air and said,
“Yum! I smell maple syrup!”

The mama mole sticks her head out of the hole, sniffs the air and said,
“Oh, Yum! I smell honey!”

Now baby mole is trying to stick his head out of the hole to sniff the air, but can’t because the bigger moles are in the way.
This makes him whine,
“Geez, all I can smell is….

45 thoughts on “Time is not measured by clocks, but by Moments.”