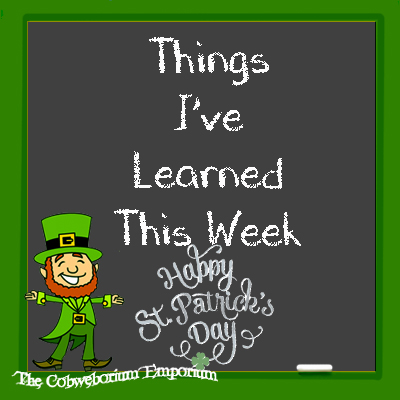 St. Patrick has a great history, and makes a good read.  So if you’re in the mood for reading, then I supply a link here —>  A history of St. Patrick the patron saint of Ireland.  <— which will open in another window and sit waiting patiently for you, until you’ve finished having a read here.  🙂   The website is owned and written by an Irish lady who’s family history also makes a great read.  So the story (and all the pages on the site) all come direct from Ireland without any twists which shouldn’t be there.

The world continues my educationalamalisation,  and I’m now wondering if that’s why I keep forgetting things.  Names of people.  Road names.  Appointments.  What I went to the fridge for?  What it was I wanted from the shop, before I’ve even got my shoes on to leave the house!  How to get to places.  (don’t suggest  SatNavs, because I can’t use the darn thing.  ‘She’ really politely tells me what to do next, and I can’t remember what it was she just said!   Useless.  I’m totally useless.  Of no use to man nor beast.

But I’ve come up with a theory that the reason I’m forgetting things is because I’m learning allll the time, and all the new stuff is pushing some of the other stuff over the edges of my brain!  Where they’re going from that point is anyones guess,  I do have a theory at that too … but I’m not about to discuss it in polite company.  😉

What were we talking about again?  Ohh yes! … educationalamalisation …  I shall continue:

I learned this week ….

That Trees sleep at night.  (cor!  I heard you gasp from here!).  Well, when you think about it,  wouldn’t you need a bit of a snooze after a long a long day of photosynthesizing?

Here, straight from the horse’s mouth (or scientists mouth in this case) is the explanation ….

It depends on how you define “sleep,” but trees do relax their branches at night, which might be a sign of snoozing,  the scientists said.

In the only reported study to look at tree ‘siestas’:  researchers set up lasers that measured the movements of two silver birch trees at night.  One tree was in Finland and the other in Austria, and both were monitored from dusk until morning on a dry, windless night in September.  This was close to the solar equinox, when daylight and nighttime are about equal.

The laser scanners used infrared light to illuminate different parts of the tree,  each for fractions of a second. This provided enough detail to map each tree within minutes, the researchers said.

The silver birches’ branches and leaves sagged at night; they reached their lowest position a few hours before sunrise, and then perked up again during the wee hours of the morning, the researchers found.

“Our results show that the whole tree droops during night, which can be seen as position change in leaves and branches,” study lead author Eetu Puttonen, a researcher at the Finnish Geospatial Research Institute, said in a statement. “The changes are not too large, only up to 10 centimeters [4 inches] for trees with a height of about 5 meters [16 feet].”

It’s unclear if the sun “woke up” the trees or if they relied on their own internal circadian rhythm, the researchers said. But “the fact that some branches started returning to their daytime position already before sunrise would suggest this [internal circadian clock] hypothesis [is right],”.

The finding isn’t too surprising.  Most living organisms have day and night circadian rhythms, and any gardener will notice that some plants open their flowers in the morning and that some trees close their leaves at night.  The famed botanist Carl Linnaeus (1707-1778) found that flowers confined to a dark cellar still opened and closed, and naturalist Charles Darwin (1809-1882) noted that the nocturnal movement of leaves and stalks on plants looked like the plants went to sleep.

So … what else did I learn this week?

Well … from watching a TV programme on TV, I learned this mind-blowing (no not really.   Not in the least bit mind-blowing, but it is a bit of fun)  information which should change the world (no it seriously won’t) …  I learned:  That ‘Google’ reports that searches for  ‘How to put on a condom’  peak at 10.28pm.  Saying nothing.  Nope.  Not going to get into that one.  I’m only here to report on my ‘learnings’.  🙂

I also learned:  There is no word for  time  in any Aboriginal language.  Maybe I should move there?  Time wouldn’t exist, and therefore I wouldn’t get any older!  Sounds fine to me … oh …. hang on ….  if I don’t get any older then I’ll miss out on Birthdays and birthday presents ….  hmmm  …  as Fagin said:  I think I’d better think it out again!

😀  –  is the fastest growing language in history.  See,  … now  this made me think that we’re all going backwards.    Cavemen and women used a similar sort of thing by drawing on cave walls in order to tell the story of their day.  “I saw a cow.  I threw a stick at the cow.” – only they drew pictures to tell that story.   …  maybe that’s where we’re heading?

And I also learned that apparently….  The name Donald means  ‘ruler of the world’.  His mother,  Mrs. Duck, must be SO proud.  (Mr. Disney will be chuffed to know that too!).

Finally ….  I learned that …  (and this made me feel a little bit sad, and think of Wall-E ...the last robot left on Earth . . .) …  On each anniversary of its landing on Mars, the Curiosity Rover hums  ‘Happy Birthday’  to itself.  😦  (imagine an ‘Emoji’ here of a crying face)

Crafters of the World – we need to unite and craft poor little Curiosity some birthday cards.  (We’ve got plenty of time, his birthday isn’t until August the 5th)

Shall we now move on to the part you’re waiting for?  Do you have your coffee ready?  Biscuits and cookies?  Ok … let’s go!

These are the JOKES folks!

Yesterday a clown held a door open for me.   …  I thought it was a nice jester.

I bought a dog from my local blacksmith. . . . When I got it home it made a bolt for the door.

I told my friend she drew her eyebrows too high. . . .  She seemed surprised.

So I applied for a job making sandwiches, . . . but the  roll  had been filled.

I’ve just been diagnosed as colour blind. . . . It came right out of the purple!

So do you feel more intelligent?  Has reading all this new stuff, pushed some of your old stuff out of your brain,  and now it’s free-falling at rapid speed,  throughout your body, bouncing off your liver, kidneys and all those other squishy things inside you?  If so … then thank heavens for that!  At least I know I’m not alone  in this weirdness.  (lol)

Have a truly fabulous Friday, and perfect St. Patrick’s Day.  May your weekend bring love, smiles, joy, and a clear conscience.

Be good to each other, and …  may your God go with you.

61 thoughts on “What I’ve Learned This Week.”