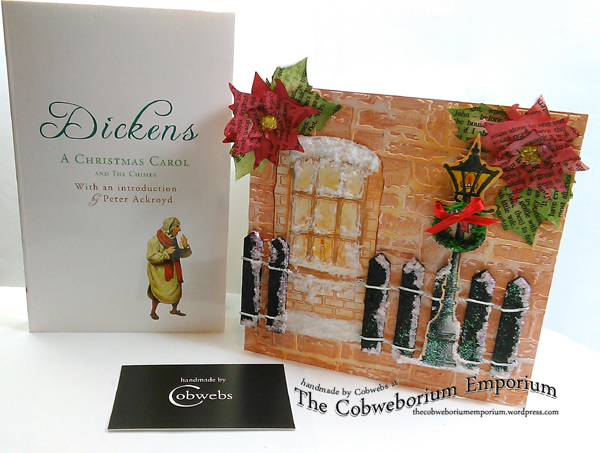 Dickens seems to be a theme running through my mind over the past week or so.  Maybe it’s just because it’s Christmas time, maybe because there was the old Alistaire Sim, A Christmas Carol, film on TV about a week or so ago – one which is a favourite of Mr.Cobs, so it was, of course, something which was a ‘must watch’ film for the dear man.

I don’t know what it is but I do know that it’s settled itself into my brain, and now my craft room, as you can see by the latest card I’ve made, pictured above, along with the Charles Dickens book – A Christmas Carol.

Made on a 6″x 6″ white cardstock.  I used an embossing folder to make the brickwork impression behind everything.

I stamped the window and the street lamp using Penny Black stamps: Winter Illumination – which come as the set of two.  Then hand painted them using watercolours, and dried them with my heat gun, so not to let the cardstock get too wet and floppy.

Although the stamped image of the lamp does have a wreath as part of its image, I wanted to give the lamp a touch of ‘3D’, so made a teeny tiny wreath for over the top of the stamped wreath, and added a red silk ribbon bow to top it off.

The wooden fence, actually is wooden fencing.  I bought a length of it a few years ago, and have used little bits of it now and again for various projects.  It’s lovely stuff because the wood will take colour really well.  Here I painted it black, and dried it off using my heat gun, as I wanted it to ‘be encouraged’ to be a matt finish, rather than give a slightly shiny finish, which it has a tendency to do if you leave it to dry naturally.

The Poinsettia flowers were made using a die, from pages cut from an old book and then inked up to colour the petals and leaves, with the addition of a few glass beads for the centres.

I added the snow using ‘Glossy White’ stencil dimension medium,  and then added some Pinflair Snow Dust to give it that crunchy snow look, and finally assemble everything with the use of black foam tape, Pinflair Glue Gel and a few dabs of glue from my trusty glue gun.

I think I’ve told you everything, but if there’s something I’ve missed or something you want more information about, don’t be shy about asking.  I’m more than delighted to help out a fellow crafter.

On a personal health note … It would appear that the infection I had has now cleared up  (hurrah!) but I’m still suffering this doggam awful pain and the doctor can’t figure that one out.  He’s checked me for any signs of a rash (thinking possibly Shingles) but there is none.  He’s booked me for a blood test (tomorrow) to take a look at my kidneys and see if something is going on there.  After that …  I think Mr.Cobs is taking me to our vets to see if they can sort me out.

Well that’s me done and dusted.  Have a wonderful, bright start to your new week.  May your Monday be peaceful.  Gentle.  Mild.  And may you end the day with a smile, and the thought that, if you consider what COULD have gone wrong today – all things considered, you had a fairly good day.

40 thoughts on “Ye Olde Christmas Past!”