Before I get to talking about card making ….  I’m sorry about the invite above saying: ‘Follow my blog with Bloglovin’ … I had to insert a bit of computer code into a new post order to ‘claim my blog‘. I’m not really sure why I need to claim my blog, but I noticed some other bloggers have done this so, in order to find out what it’s all about, I registered with Bloglovin. Will see what’s so exciting about it.  You can ignore it … you don’t have to click to follow me on there – unless you want to, of course.

There are cards for every sort of occasion and every type of person, (or personality) and I sat for 20 minutes trying to decide on what sort of card I was going to make for a relatives 89th Birthday.  I’ve made her cards  (Birthday, Christmas etc) for a few years, but I felt that she needed something different this year.  Not so fussy, but still with something going on.  Hmm… something with butterflies I think.

I knew I had a little kit which made up two jars of either butterflies or sweeties so I went in search of them among the box of Hunkydory stuffs.  I’d forgotten how pretty they were and the moment I saw them I knew that I’d make her one of these.

In ‘kit’ form this is what you get:

The pink jar is the sweet jar, and the blue, as you saw at the head of this post, is the butterfly jar.  But … there’s nothing to say that you can’t mix them up and swap butterflies for sweets.

Now … I have a bit of a problem in making ‘kit cards’.  I ALWAYS feel like I’ve cheated and let the whole crafting community down.  I don’t know why I feel like that, I just do.  But, I know that there very much is a place for kits and also know my relative will love this card.  It’s very ‘her’.

You begin by popping out the ‘front’ central part of the jar, and then cutting some clear acetate  to match the shape of the ‘hole’ in the front of the jar, you then fix that to the inside of the card front.

It’s when you get to this point in the making that you need to stop and think about how you’re going to write the card out when it’s made.  Yup… you need to do that now before you fix any of the butterflies into the jar, because once fixed in place, you’ll have a difficult time trying to write on the back of the card.

The reason the card has that 3D effect is because of the roundedness of the front.  And that happens because the front is cut slightly bigger than the back. So once you’ve fixed the butterflies into the inside of the jar you then fix that card (jar) front in place.  If you scroll up to the photo of the unmade kits, you’ll notice that on the one edge of the card front, there’s a little flap.  That little flap allows you to adhere the front to the back … but because the card front is too big it ’rounds out’ and so gives the jar it’s shape.  (The use of craft clamps comes into use for this part). 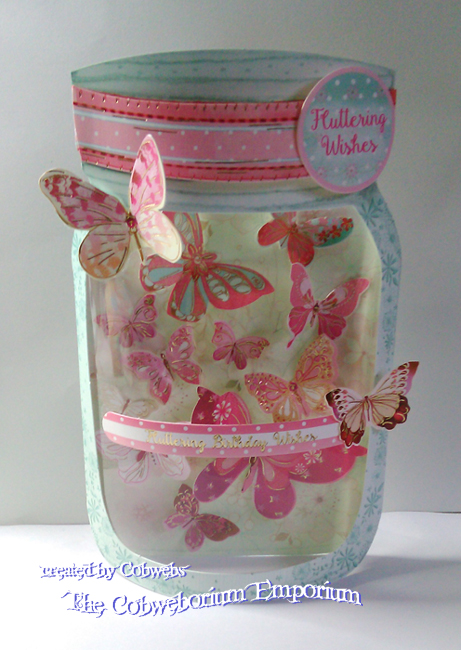 This is the finished card as far as the kit is concerned, however you can then add your own touches to it to make it yours.

I added some deep pink with white dots ribbon ‘ties’ which I made (look like bows but not bows), and a silver metal, dangly charm fixed onto a large white paperclip,   which had a little more of the ribbon looped onto the top of it,  which I attached it to the back of the card so that the charm was dangling down next to the hand-written message.

I totally forgot to take a photo of the extra touches until it was packaged and sealed inside its postal box so you’ll just have to imagine the end result.  [sigh…  I’d be terribly dangerous if I had a brain]

And, as they say, that was it!  VOILA!  It’s an easy to put together card, the majority of the time is taken up with trimming off the little ‘tabs’ from where the die cuts were still attached to the cardstock.  Other than that it’s a simple card to make.  But looks so pretty when made.

As I was putting this card together I kept singing the theme song to a lovely, gentle sitcom, called Butterflies,  which was made and shown on the BBC, here in the UK,  between 1978 to 1983, and if I find it showing now, I’ll actually sit and watch it, just to be reminded of a more gentle time.  The theme tune is the Dolly Parton song Butterflies, but for this programme it was recorded by a singer called Clare Torry, and I think this may have been because Ms Torry had a little softer and more gentle tone to her voice.

It’s only 38 seconds long, so I share it with you here:

If I’ve got an earworm I think I should share it with everyone so that you can have it too.  I was taught that it’s nice to share.  [grins]

Have a beautiful Wednesday, whatever you’re doing.  Thank you for coming and having a coffee with me, I love having your company.

Sending my love,  from here in my corner to you in yours.