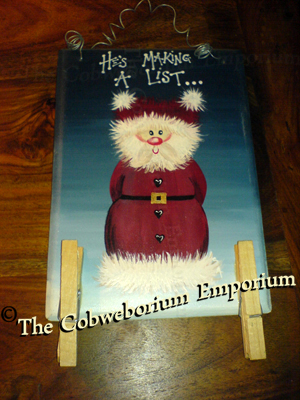 Around fourteen or fifteen years ago I made and painted a whole bundle of these boards for a Christmas Craft Fair which I’d been asked to do, and they went down a smash hit with parents and grandparents, who bought them for their little ones.

The idea is that the little ones would write their list of toys they hoped that Father Christmas would bring for them, then Mommy, Daddy, or a Grandparent or carer, would ‘peg’ the list to the board using those pegs which you can see in the photo – which are permanently attached to the board.  However … Father Christmas with the wording over his head, was a reminder to the little monkeys amongst them to be good because they had to remember that Santa Claus was   making a list – and checking it twice!  What better way to make sure that a little monkey changed his or her ways and became a little Angel – at least … until after Christmas!

I was reminded of these boards recently and thought that I really ought to make at least one more, for the littlest member of my family – in the hope that perhaps a little Angel might just be made from a rascally monkey!

Made from a rectangle of slim MDF (Medium Density Fibre-board) – as it’s known here in the UK (not sure what it might be called in the country where you are – perhaps Mr. Google would be your friend there!).  I got himself to bevel the edges (using a router) so that they curved away and then had him drill two small holes so that, once painted and sealed, I could feed some wire through them, in order to make the curly wired hanging wires.  Then it was on to the fun stuff ….

I hand painted the night sky and snow, then, once dry, painted the cutesy Father Christmas, or Santa.  I left the boards to dry for a couple of days (so that they were fully dry) and then gave the whole board a gentle, but good, spray over with an acrylic varnish which has the finest particles of glitter dust suspended in it.  Once this was dry the glittery particles twinkled merrily in the light – but it doesn’t give it that white sheen which other glitter varnishes can sometimes give.  Sadly the twinkles didn’t show up in the flash photo, so you’ll have to imagine them there!

I don’t draw when I’m going to paint something – I will scribble a few lines as a reminder of where I want to place something,  but I don’t actually ‘draw‘ anything.  For example – on these board paintings all I ‘drew’ was a freehand circle – which was where I roughly wanted F.C.’s face to be,  But other than that I didn’t draw anything.  I’m someone who prefers to just go straight in with paint and ‘see’ the idea I have inside my head come to life.

I didn’t use a pattern or anything like that,  I just painted the idea I had, so sadly can’t offer to share a pattern to paint something like this.  But painting a folksy fun type of Santa isn’t that difficult.  You don’t have to put in much detail, there are no wrinkles to his face or his clothes – so you don’t have to worry about that.  But – even if you think you’re not a painter – just have a go!  You’ll never know what you can do unless you have a go!